Pancha Sila (Pali: pañcasīla; Sanskrit: pañcaśīla), also known as "the five precepts," constitute the basic code of ethics undertaken by lay followers of Buddhism. "Taking pansil" is a voluntary commitment by a layperson to try to adhere to the rules or precepts of Buddhism.

The first precept consists of a prohibition of killing, both humans and all animals. The second precept is against theft. The third precept prohibits sexual misconduct or adultery in all its forms. The fourth precept is about abstaining from falsehood spoken or committed to by action, as well as malicious speech, harsh speech and gossip. The fifth precept prohibits intoxication through alcohol, drugs or other means.

Within the Buddhist doctrine, they are meant to develop mind and character to make progress on the path to enlightenment. 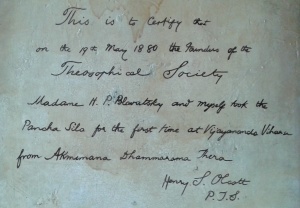 Olcott's certificate of taking pansil. Original is on a wall at Wijayananda Temple, Galle.

Theosophical Society founders Helena Petrovna Blavatsky and Henry Steel Olcott visited the Vijayananda Vihara Temple in Galle, Ceylon [now Sri Lanka]. There they took pansil from the priest, Akmenana Dhammarama Thera, on May 19, 1880. They may have been the first Westerners to take pansil. Colonel Olcott wrote out a statement affirming their actions on a wall of the temple, where it still remains.