Florence Ada Fuller was an Australian Theosophist and painter. The contents of this page are all quoted directly from the exhibit announcement from the December 2015 exhibit of her works at the Adyar Museum on the estate of the Theosophical Society.

Florence Fuller was born in Port Elizabeth, South Africa, in 1867, a daughter of Louisa and John Hobson Fuller. She had several siblings, including sisters Amy and Christie, both of whom subsequently became singers. 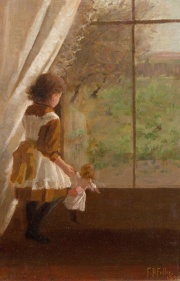 The family migrated to Australia when Florence was a child. She worked as a governess while undertaking studies in art, and first took classes at the National Gallery of Victoria Art School in 1883, then again for a further term of study in 1888. During this period she was a student of Jane Sutherland, referred to in the Australian Dictionary of Biography as "the leading female artist in the group of Melbourne painters who broke with the nineteenth-century tradition of studio art by sketching and painting directly from nature".

Fuller's uncle was Robert Hawker Dowling, a painter of orientalist and Aboriginal subjects, as well as portraits and miniatures. British-born, he had grown up in Tasmania and made a living there as a portraitist, before returning to his native England at age thirty. For the next two decades, his works were frequently hung at the Royal Academy. He returned to Australia in 1885, and Fuller became his pupil. In that year, aged eighteen, Fuller received a commission from Ann Fraser Bon, philanthropist and supporter of Victoria's Aboriginal people. The commission was for Barak–last chief of the Yarra Yarra Tribe of Aborigines, a formal oil on canvas portrait of the Indigenous Australian leader, William Barak. Ultimately, that painting was acquired by the State Library of Victoria. Although the painting is an important work regularly used to illustrate this significant figure in Australia's history, interpretations of Fuller's portrait are mixed: one critic noted the painting's objectivity and avoidance of romanticising Aboriginal people, while another concluded that "Fuller is painting an ideal rather than a person".

In 1886, Dowling returned to his native England. Giving up her work as a governess, Fuller began to paint full-time, and had opened her own studio before she had turned twenty. Dowling had intended to return to Australia and had left behind an incomplete portrait of the Victorian governor's wife, Lady Loch. He died, however, not long after arriving in England; Fuller then completed Dowling's commission. Lady Loch became her patron. Other early portraits followed: two pictures of homeless children, entitled Weary (inspired by Henry Wadsworth Longfellow's poem on child labour "Weariness") and Desolate, in 1888; and Gently Reproachful circa 1889. Weary was acquired by the Art Gallery of New South Wales in 2015. The gallery's curator of Australian art described the depiction of billboard posters in the painting as giving it a "sense of gritty realism that was arguably unprecedented in Australian art."

Also in 1889, Fuller was awarded a prize by the Victorian Artists Society for best portrait by an artist under twenty-five. 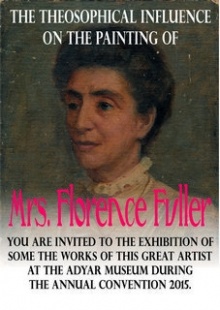 Biographer Joan Kerr speculated that it may have been Jane Sutherland who introduced Fuller to Theosophy, a spiritual and mystical philosophy that teaches the unity of existence and emphasises the search for universal wisdom. Described by art historian Jenny McFarlane as "the most important counter-cultural organisation of the late nineteenth and early twentieth centuries", it was influential throughout Fuller's life. She joined the society in Perth on 29 May 1905, after hearing charismatic theosophist Charles Webster Leadbeater during his lecture tour. Bessie Rischbieth was a feminist who joined at the same time, and together they influenced the movement's development in early twentieth century Perth.[39] Fuller was variously secretary, treasurer, and librarian of the local branch of the Theosophical Society.

In 1906 Fuller's portrait of feminist and theosophist Annie Besant was among the paintings exhibited at the West Australian Art Society's annual exhibition. Around the same period, she painted other portraits of the movement's leading figures, including Henry Steel Olcott and Helena Petrovna Blavatsky. These representations departed from the academic portraiture in which Fuller had trained, as she incorporated practices of intuition and visualisation "inspired by Indian aesthetics as mediated by the Theosophical Society". 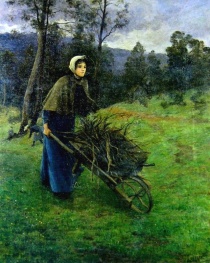 Whilst Yet the Days Are Wintry

In 1907, Besant became the president of the Theosophical Society globally, and set to work with a major expansion of the organisation's headquarters at Adyar, in what was then, Madras. When it was announced that Besant would undertake a speaking tour of Australia in 1908, she was expected to stay with Fuller while in Perth. Some months later in 1908, Fuller left Western Australia and travelled to India, staying at Adyar. Of her time in India, Fuller wrote:

"I went in search not only of beauty, and light, and colour, and the picturesqueness in general, which delight the eye and emotions of all artists—but of something deeper—something less easily expressed. I spent two and a half years in a community that is quite unique—perhaps the most cosmopolitan settlement in the world—the headquarters of the Theosophical Society ... Well, I painted there, of course, but my art was undergoing a change, and I felt that it could not satisfy me unless it became so much greater."

Fuller's time at Adyar was eventful. Leadbeater arrived around the same time as Fuller, and soon afterward he "discovered" the person he believed would become a global teacher and orator, Jiddu Krishnamurti (then in his teens). Leadbeater and others tutored Krishnamurti. Fuller may have taught him photography. She also had a small studio built in the grounds, and painted. Her works from the period include a portrait of Leadbeater and Portrait of the Lord Buddha. McFarlane emphasises the significance of the latter work, pointing out that it is "strikingly modern" in comparison to all of Fuller's other work, and more radical than compositions created by Grace Cossington Smith and Roland Wakelin, half a decade later. The painting owes much to theosophy's emphasis on seeing the subject "through a psychic, visionary experience". 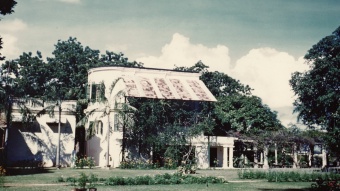 Sources describing Fuller's movements after her time in India sometimes are ambiguous. She arrived in England in June 1911, where she marched with Besant in the suffragette protests associated with the coronation of George V. She continued to paint portraits, but found it difficult to realise the transformation in her art that she had conceptualised in India: I have painted a great many portraits since I have been in England, and have been, I suppose, fairly successful—though I have done nothing in any way remarkable. The hidden inner life has not yet succeeded in expressing itself on canvas, and I can only write myself as one who aspires to a greater art, but who has not yet achieved.

Fuller subsequently travelled from London to India in 1914. One newspaper report described her as a "visitor" to Sydney in 1916, although McFarlane says she travelled there with Leadbeater and remained in the city. Another report stated that she visited Brisbane a year later.] Both newspaper pieces indicated that Fuller had spent a period painting in Java (at that time part of the Dutch East Indies), although when this occurred is not clear, and such a visit is not mentioned by McFarlane. There was at least one subsequent substantial journey, as Fuller arrived again to Sydney, via Perth, from India in 1919. At some point following these travels, Fuller settled permanently in Mosman in Sydney's northern suburbs, where she continued to paint, including miniatures. Her 1916 visit to Sydney had included an exhibition of a group of her miniatures, all of them portraits of theosophists including Besant and Henry Olcott, co-founder of the Theosophical Society.

Fuller continued to be associated with the theosophical community as her health and economic circumstances deteriorated.

In 1927, at the age of sixty, she was committed to Gladesville Mental Asylum (as it was then known), where she died nearly two decades later, on 17 July 1946. She was buried at Rookwood Cemetery.

Miss Fuller wrote some articles. The Union Index of Theosophical Periodicals lists 9 articles by or about her.