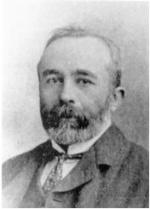 Frederick J. Dick (1856-1927) was a close student of Helena Petrovna Blavatsky, a resident of the Point Loma community, and the brother-in-law of Herbert Coryn. He was a mathematician and civil engineer, Head of the Harbors and Lighthouse Board for Ireland.[1]

Boris de Zirkoff wrote of him:

A royal man! Cabinet Officer of the Theos. Soc. of Point Loma, and Prof. of Mathematics. Died of a stroke at Point Loma, May 24, 1927; he was 71 only and actively working. Joined in Dublin in 1888, pupil of HPB herself. Came to Point Loma, 1905. Largely responsible for the starting of the Gaelic Movement in the Dublin Lodge TS. Prolific writer in "The Theosophical Path" and other magazines. Prepared a new edition of HPB's Isis Unveiled, checking an enormous number of quotations for accuracy, and making a most valuable index and bibliographical index besides. Married first Mrs. Annie P. Dick, whose maiden name I do not know, a woman of rare spirituality and culture; she died in 1904. Then he married Miss Fanny [Frances] Coryn, sister of Herbert Coryn, M.D., also a personal pupil of HPB in the London days. Dick was very similar to W.Q.Judge in many ways.[2]

The Union Index of Theosophical Periodicals lists an article by Frederick J. Dick in an 1890 issue of Lucifer, and 2 articles by FJ Dick in The Irish Theosophist in 1896.