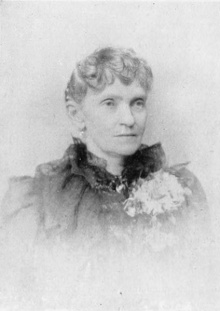 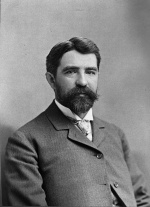 Josephine Warner was born in Connecticut on June 12, 1844, or 1843 in some sources. Orphaned at the age of five, she experienced a harsh upbringing by her Puritanical grandmother, leaving the girl resolved to treat all beings with the compassion lacking in her childhood.

She married James Harvey Cables (1842-1924), a Civil War veteran who worked as a bank note detector for an agency that identified counterfeits. Their daughter Cherry was born around 1857-1860.[1] Cherry grew up to be an actress, married to actor George Garland. Little is known of their family life, but it may have been strained by the Panic of 1883 and subsequent recession. In 1880 Cherry, her husband, and daughter Lilian were living with James and Josephine, along with boarders William B. Shelley and his wife. Shelley later cofounded the Rochester Branch of the Theosophical Society with Josephine Cables.[2] In the late 1880s, James and Josephine were divorced.

Josephine's second husband, William F. Aldrich (1853-1925) was a civil engineer, and wealthy owner of various mining and manufacturing enterprises, mostly located around the town he established, Aldrich, Alabama.[3] He joined the Gnostic Lodge of Washington, D.C. on October 15, 1885.[4] On April 16, 1889 he married Josephine Cables.[5] They adopted two children: Farrington (1889-1908) and Josephine, and owned a mansion called Rajah Lodge.

Mr. Aldrich was elected as a Republican to the fourth congressional district of Alabama. The election was hotly contested election "based on alleged intimidation an racial prejudices growing out of appeals for white supremacy," and was ultimately decided by a House committee.[6][7] He was reelected twice. In 1912 he became an owner and editor of the Birmingham Times. "His career as an editor was full of action. He advocated in politics democracy as against autocracy."[8]

Josephine Cables was a very dedicated and active member of the Theosophical Society.

On July 27, 1882, Mrs. Cables became a co-founder of the Rochester Branch, which was the first lodge established in the United States. She, her husband James, and fourteen others from Rochester joined the membership rolls of the Theosophical Society on that day.[9] The first issue of William Quan Judge's periodical The Path said of Rochester, "This is the elder brother in America."[10] William B. Shelly (or Shelley) served as president, and Mrs. Cables was secretary.[11] For several years before the lodge was formed, Mr. Shelly and Mrs. Cables had gathered with a group of friends to study "problems presented to thinking minds in life and death."[12]

The lodge grew to at least 25 members, including Matilda Joslyn Gage, a remarkable feminist and mother-in-law of L. Frank Baum. She was admitted to the Rochester Theosophical Society on March 26, 1885.[13][14] Another member who joined on Jun 11, 1884 was George C. Bragdon, father of Claude Bragdon.[15] The Bragdon family was prominent in several Rochester lodges, including Genesee, White Lotus, and Iris, and established the Manas Press. William Quan Judge reported:

The Rochester Branch seems to us to be, in this country at least, the vital centre of Theosophy. No members are admitted to that branch unless in the opinion and knowledge of its officers they are worthy and striving diligently to make themselves more worthy by pure lives and kind actions, pure thoughts and worthy deeds.

We are especially impressed with the beauty of character and the wonderful working capacity of Mrs. J. W. Cables, the secretary. She seems gifted with a remarkable penetration amounting to prescience, enabling her to read the minds and history of all with whom she comes in contact and to tell them what they are to expect, and what they may be able to accomplish in the future by their own labors if they will. She was the first of all Theosophists at Rochester and has now gathered a faithful company of co-workers about her to the number of about forty. She could have many more members if she were at all indifferent as to the character of all those who offer themselves. But she prefers purity to the fictitious strength to be realised from mere increase of number. We did not see Mr. Shelley the worthy and venerable President of the Branch as he was absent from home. The Society is sorely persecuted and tried by its enemies – The enemies of Theosophy. But probably not more so than other branches. The beauty of all this is that they make a perfect triumph at every point of attack. In all these labors Mrs. Cables is the moving and diving spirit knowing just what to do and how to do it. And under her leadership it is inspiring and beautiful to see how kindly and harmonious they all work together.[16]

The Occult Word was a monthly magazine that is recognized as the first Theosophical periodical published in the United States. Josephine Cables was the editor. The first issue was dated in April 1884, and the run continued until April 1889. After a first-year initial subscription of $1.00, the publication was free.

Letterhead for Board of Control, 1886.

American Board of Control

The American Board of Control was constituted on May 13, 1884 by "Special Order" of President-Founder Henry Olcott, then in India, to establish central management of the American branches of the Theosophical Society. Mrs. Cables was took on the role of corresponding secretary; Elliott B. Page of St. Louis was President; and Dr. J. D. Buck served as recording secretary and treasurer. Other Board members were Abner Doubleday, William B. Shelley, George Frederic Parsons, Thomas Moore Johnson, and Mordecai D. Evans. Professor Elliott Coues was also a member for a time.

The Board of Control held a convention in July, 1886, at Rochester, N. Y., when various matters relating to admission of members and other details of organization were discussed. In accordance with a resolution passed on June 6th by the Executive Council, Adyar, the Board was then dissolved.[17] On October 30, 1886, Dr. Buck chaired a convention held in his Cincinnati home to establish the American Section of the Theosophical Society.[18] William Quan Judge was elected as General Secretary and Treasurer.

Symbol of the Rochester Brotherhood

On November 3, 1887, Mrs. Cables organized the Rochester Brotherhood, an esoteric society dedicated to the study of the Christian scriptures and the teachings of Theosophy. She had also used the phrase previously from time to time in The Occult Word, and used that journal to recruit members.

Each group within the Rochester Brotherhood was named by those applying for its charter, using the name of a person or place, or of a virtue such as "Truth." Two or more people could start a group, with one officer, "a secretary, who shall be the regular channel of communication between the Group and Headquarters." Individuals accepted into the Brotherhood was to use the initials "R.B." after their names.[20]

The Brotherhood issued a pamphlet called Christos that was mentioned in The Hermetist of W. P. Phelon.[21] 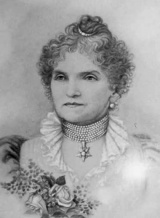 Mrs. Cables studied with Peter Davidson, also known as Max Théon, the "Provincial Grand Master of the North" of the Hermetic Brotherhood of Luxor.[22]

She presided over one of two main lodges of the brotherhood, with the other headed by Thomas Moore Johnson in Osceola, Missouri.[24] Some of the letters that she and Johnson exchanged have been published in Letters to the Sage: Selected Correspondence of Thomas Moore Johnson Volume Two:

The main theme of her correspondence with Johnson is the stress and tension within the American TS as a result of the creation of the H. B. of L., and the hostility she suffered from Theosophist over her involvement in the secret society.[25]

Mrs. Aldrich assisted her husband in his plan to institute a system of public defenders for people accused of crimes.

They believe the administration of justice is very one sided in civilized countries. They are inclined to think, in brief, that free government in this country means a government of rich men, by rich men for rich men, the poor, the women, the children, Indians and other unfortunates not being people at all in the popular sense of the word.

Mr. and Mrs. Aldrich declare that especially in a law trial a poor person without friends is almost certain to be convicted whether guilty or not, under the present administration of justice, or injustice, as they incline to think it often is. Judge, jury and state's attorney are paid by the state, and are all on the side of wealth and power.

For this reason the philanthropic pair propose to be two out of twenty who shall give $5,000 each as a fund to secure the appointment of public defenders, lawyers of brilliant powers and established reputation, to conduct the defense of accused persons who are too poor to secure the services of able lawyers for themselves. Ultimately, when laws can be passed to that effect, these public defenders, as the promoters of the plan hope, will be employed by the state and paid by the state, as the prosecuting attorney now is.[26]

The Woman's National Industrial League was a union of female federal clerks that later joined the Knights of Labor.

Woman's National Liberal Union (WNLU) was founded by Matilda Joslyn Gage, whom Josephine knew from the Rochester Branch, and "reflected in particular Gage’s belief that the established churches were a major bulwark of male supremacist teaching, a view she expanded on in her book Woman, Church, and State (1893)."[29] Mrs. Aldrich was also the publisher of Matilda Joslyn Gage's The Liberal Thinker.

Woman's National University and School of Useful and Ornamental Arts was a proposal of Mrs. Charlotte Smith, who lobbied Congress to establish such an institution in Washington, DC.[30]

The Union Index of Theosophical Periodicals lists six articles by or about Mrs. Cables. The contents of her journal The Occult Word are not included in the index; issues are quite rare.