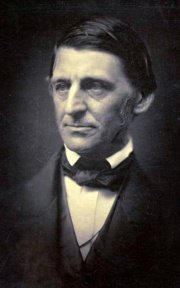 Ralph Waldo Emerson (b. May 25, 1803 – d. April 27, 1882), was a American writer, lecturer, and poet whose beliefs founded the Transcendentalism movement. Originally a Unitarian pastor who studied at the Harvard School of Divinity, he soon became disillusioned with the conventional forms of worship. He then became a renowned lecturer and advocated the natural intuition of the soul, which inspired many other great writers, including his long time friend Henry David Thoreau.

Ralph Waldo Emerson was born on May 25, 1803, in Boston, Massachusetts to the Reverend William Emerson and Ruth Haskins Emerson. He began his education in 1812 at the Boston Latin School, where he then went on to attend Havard College. During his experiences at college, Emerson viligantly kept a journal, which he called "Wide World", to record his current thoughts and emotions. After college, Emerson went on to become a schoolmaster, but shortly returned back to Harvard in 1825 to enroll in their School of Divinity.

After finishing his schooling, Emerson began to preach at Boston's Second Church as a junior pastor. It was during this time that Emerson met Ellen Tucker, whom he married in 1829. Unfortunately, Ellen Tucker fell ill with tuberculosis, and died in 1831. Ellen's death from tuberculosis, along with Emerson's two brothers, Edward and Charles, made Emerson question the church and pushed his resigniation in 1832. He then went on a tour of Europe, which led him to other great philosophers of the time, including Samuel Taylor Coleridge, William Wordsworth, and Thomas Carlyle. With their intellectual stimulation, Emerson began to fully believe in self-reliance, nature, and in other beliefs that would serve as the foundation of Transcendentalism.

Upon his return to America in 1833, Emerson moved to Concord, Massachusetts, to live in the Old Manse. He began his lecture series, "The Uses of Natural History", and helped inspire him to publish his first essay, "Nature" in 1836. During these years, Emerson also remarried to Lydia Jackson, with whom he would have four children. He also meet Amos Bronson Alcott and Margaret Fuller, leading to the formation of the Transcendentalist Club. He gave the "American Scholar Address" at Harvard, which inspired fellow writer Henry David Thoreau. After several more seasons of lectures and writing for The Dial, Emerson published Essays (First Series) in 1841 that included "Self-Reliance" and "Over-Soul".

Emerson continued to lecture and publish his works, but started to become more aware of the political issues of slavery. In 1844, he gave the address "Emancipation in the British West Indies" as a statement against slavery, which shaped his belief throughout the years approaching the Civil War. He highly regarded the Emancipation Proclamation, and continued to support the equality of slaves. In the years following the Civil War, Emerson's health went into continual decline, and stopped making regular journal entries in 1875. He passed away on April 27, 1882, and is buried in the Sleepy Hallow Cemetary in Concord, Massachusetts.[1]

Emerson was known to own various Eastern texts, including at the time the only American copy of the Hindu Scripture, The Song Celestial.[2] It is also known that Emerson owned over 23 different other volumes of popular Eastern texts, which included the Bhagavad Gita and the Vedas.[3]

The transmission of Eastern concepts to Emerson greatly influenced his essays and poetry, and often found its way into his literature. The Eastern wisdom left a large impression on Emerson and his works, as noted by Alvin Boyd Kuhn:

The evidence runs through nearly all his works like a design in a woven cloth. Scores upon scores of passages in his Journals and Essays show that he leaned often on the Vedas for inspiration, and paraphrased lines of the Puranas in his poems...His Journals prove that his reading of the ancient Oriental classics was not sporadic, but more or less constant.[4]

Manly Palmer Hall wrote that "Emerson was a geographical misfit. Mentally he belonged to templed India... in the writings of the Eastern prophets he realized the maturity of viewpoint of a far-off civilization and set himself to the study and application of the great teachings of the Vedas to his own people and time[5]

Scholars, contemporary with Emerson, did not know enough of the Vedas to realize he was using the philosophy of India, so every one was happy. Had they found out where Emerson got his material they would probably have arranged to tar and feather him. As it was, taking everlasting and eternal verities and clothing them in the garment of a good vocabulary, Emerson stated them in terms of our Western understanding and gave them to this world, which rejoiced and took them to its heart."[6]

Due to Emerson's extensive use of Eastern wisdom, it is widely believed that he laid the foundations for further schools of thought, such as Theosophy. It is often remarked that the extension of Theosophy could not have been possible without Emerson, as Alvin Boyd Kuhn remarks:

It may seem ludicrous to suggest that Emerson was the chief forerunner of Madame Blavatsky, her John the Baptist. Yet seriously, without Emerson, Madame Blavatsky could hardly have launched her gospel when she did with equal hope of success. There is every justification for the assertion that Emerson's Orientalistic contribution to the general Transcendental trend of thought was preparatory to Theosophy. It must not be forgotten that his advocacy of Brahmanic ideas and doctrines came at a time when the expression of a laudatory opinion of the Asiatic religions called forth an opprobrium from evangelistic quarters hardly less than vicious in its bitterness. Theosophy could not hope to make headway until the virulent edge of that orthodox prejudice had been considerably blunted. It was Emerson's magnanimous eclecticism which administered the first and severest rebuke to that prejudice, and inaugurated that gradual mollification of sentiment toward the Orientals which made possible the welcome which Hindu Yogis and Swamis received toward the end of the century.[7]

H. P. Blavatsky regarded Emerson and his belief in Transcendentalism with great admiration. She especially reviewed the Over-Soul in her Collected Writings:

It is such men as these who knew of no other Deity but that which dwelt in them as they felt themselves inseparable from It, that Emerson must have had in his mind when writing his Essay on the Over-Soul. Alone Emerson, one of the most transcendental idealists of our century, in his Essay on the Oversoul gives in a few words the most superb definition of the psychological states above referred to. Speaking of the commingling of the individual with the Universal Soul, he describes it by saying: "I, the imperfect, adore my own Perfect." Among those who come right under Vaughan’s definition of Theosophists, Emerson stands conspicuous. His writings, remarks a pious critic, would have been at once welcomed. . ." had it not been for some startling paradoxes and audacious statements, which, while they were in direct conflict with the theological beliefs of the people, were supported neither by facts nor arguments, but rested on the simple testimony of the author’s individual consciousness."[9]

The works of Emerson are often believed to have elements of Pantheism, as his writing stresses the unity of man and the universe. His philosophy on the oneness and presence of divinity within all life is acknowledged by Curuppumullage Jinarajadasa:

In modern days, we have a revival of pantheistic teaching in Emerson. He amplifies the ancient teachings of Plato and the Stoics of a universal Divine Mind. It is this Divine Mind, the "Over-soul", "within which every man's particular being is contained and made one with all other; that common heart, of which all sincere conversation is the worship, to which all right action is submission; that overpowering reality which confutes our tricks and talents, and constrains everyone to pass for what he is, and to speak from his character, and not from his tongue, and which evermore tends to pass into our thought and hand, and become wisdom, and virtue and power, and beauty. We live in succession, in division, in parts, in particles. Meantime within man is the soul of the whole; the wise silence; the universal beauty, to which every part and particle is equally related; the eternal ONE. And this deep power in which we exist, and whose beatitude is all accessible to us, is not only self-sufficing and perfect in every hour, but the act of seeing and the thing seen, the seer and the spectacle, the subject and the object, are one. We see the world piece by piece, as the sun, the moon, the animal, the tree; but the whole, of which these are the shining parts, is the soul."[10]

Coming to our own sagely reflecting Emerson, we hear him reiterate the concept of the divine philosophy:

"Meantime within man is the soul of the whole; the wise silence; the universal beauty, to which every part and particle is equally related; the eternal One. From within or from behind a light shines through upon things . . . . When it breathes through his intellect, it is genius; when it breathes through his will, it is virtue; when it flows through his affection, it is love . . . . Of this pure nature every man is at some time sensible . . . . It is indefinable, immeasurable, but we know that it pervades and contains us. We know that all spiritual being is in man . . . . Let man then learn . . . . that the sources of nature are in his own mind."[11] 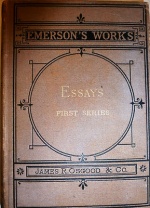