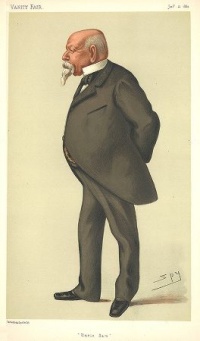 Samuel Cutler Ward (January 27, 1814 — May 19, 1884), often referred to as "Uncle Sam," was a lobbyist, diplomat, and bon vivant who was present at many gatherings held by Helena Petrovna Blavatsky at the Lamasery.[1] He was famous in his time as the "King of the Lobby" who established a social style of political lobbying over elegant meals.

According to Henry Steel Olcott in Old Diary Leaves, Sam Ward sent him a copy of his nephew Francis Marion Crawford's novel Mr. Isaacs,[2] which was mentioned in Mahatma Letter No. 102 and 104.

The Theosophist published an obituary in July, 1884:

Comparatively late in life, when his mind was attracted by spiritual matters, he threw himself into the subject with that energy and singleness of purpose, which secured his success in other departments of his career, His disinterested endeavours in the cause of Theosophy were of great value. He brought the subject into prominence among the refined and cultivated classes of society, in which he moved; and created a great and wide interest in our cause by a judicious and extensive distribution of Esoteric Buddhism at his own expense. The remarkably cordial greeting given to Col. Olcott in English Society and on the Continent is in some measure due to the exertions of Mr. Ward to smooth the path.[3]

I record, with much sorrow, the death of Sam Ward, the familiar “Uncle Sam” of a very large circle of friends. His genial face and cheery voice will be long and widely missed. The Ргеss of this country has borne testimony to his influence, and to the affectionate respect which he inspired on both sides of the Atlantic. He was cosmopolitan in his tastes and sympathies — a man of the world, in the best sense of that much abused term. But while the public journals have testified to this, they have unaccountably overlooked the fact that Mr. Ward was an old and experienced Spiritualist; and that of late years he had devoted much attention to the Claims of Theosophy, being a member of the London Lodge of the Theosophical Society. It is no secret that he — Uncle Bellingham of the book — inspired “ Mr. Isaacs,” the successful novel of Mr. Marion Crawford. He was, indeed, a diligent Student of the occult in all its phases. The very last time I conversed with him, he spoke much on these matters, and invited me to a seance which he was about to hold at his chambers in Piccadilly. He died at Pegli, after a somewhat long illness; and many friends will join in a sincere and affectionate tribute to the memory of а rare man.[4]