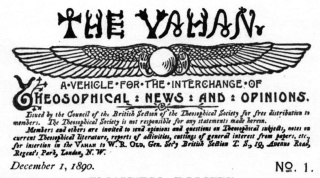 The Vahan was a periodical published at the HPB Press in London from 1890 to 1920. It was subtitled, "A Vehicle for the Interchange of Theosophical News and Opinions." Initially, the editors were H. P. Blavatsky and Walter R. Old, but in August 1891, after her death, G. R. S. Mead took over.

The first lines printed on December 1, 1890 explained the name:

Because, the word means a Vehicle. In Theosophical metaphysics this term denotes a basis, something, as a bearer, more substantial than that which it bears; e.g., Buddhi, the spiritual Soul, is the Vahan of Atmâ -- the purely immaterial principle. Or, again, as in physiology, our brain is the supposed physical vehicle or Vahan of superphysical thought.

Thus, this little fortnightly paper is destined to serve as the bearer of Theosophical thought, and the reorder of all Theosophical activities.

Even it its early days, issues could be difficult to find. When Thomas Moore Johnson wrote to G. R. S. Mead asking for back copies, Mead responded, "I am afraid that it is almost hopeless to find back numbers of the early volumes of the Vahan; they have not been kept."[1]

A Swiss Anthroposophical website has posted beautiful scans from April 1896 through September 1908:

The American Theological Libraries Association microfilmed a complete run of the periodical through the cooperative efforts of the Henry S. Olcott Memorial Library and Alexandria West Library. The ATLA has been digitizing all its films, but access is allowed only by subscription.