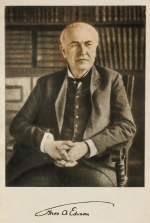 Thomas Alva Edison (February 11, 1847 – October 18, 1931) was an American inventor and businessman. He was the fourth most prolific inventor in history, holding 1,093 US patents in his name, as well as many patents in the United Kingdom, France, and Germany. He developed many devices that greatly influenced life around the world, including the phonograph, the motion picture camera, and a long-lasting, practical electric light bulb. Thomas Edison died of complications of diabetes on October 18, 1931, in his home, "Glenmont" in Llewellyn Park in West Orange, New Jersey.

Edison stated, "I do not believe in the God of the theologians; but that there is a Supreme Intelligence I do not doubt."[1]

Nonviolence was key to Edison's moral views, and when asked to serve as a naval consultant for World War I, he specified he would work only on defensive weapons and later noted, "I am proud of the fact that I never invented weapons to kill." Edison's philosophy of nonviolence extended to animals as well, about which he stated: "Nonviolence leads to the highest ethics, which is the goal of all evolution. Until we stop harming all other living beings, we are still savages".[2] However, he is also notorious for having electrocuted a number of dogs in 1888, both by direct and alternating current, in an attempt to argue that the former (which he had a vested business interest in promoting) was safer than the latter (favored by his rival George Westinghouse).[3] 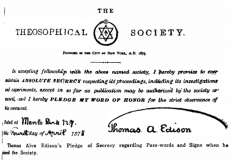 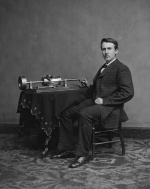 Thomas Edison with his second phonograph, in April 1878

On April 4, 1878, Edison signed a pledge of secrecy [shown at right], and the next day, April 5, he sent in his signed application for Fellowship in the Theosophical Society, becoming a member in New Jersey.[4] The application was approved on August 27, 1878, placing him as the 162nd person to be admitted to the Society.[5]

Olcott wrote of his conversations with the inventor:

On the 5th April, T. A. Edison sent me his signed application for membership. I had had to see him about exhibiting his electrical inventions at the Paris Exposition of that year... Edison and I got to talking about occult forces, and he interested me greatly by the remark that he had done some experimenting in that direction. His aim was to try whether a pendulum, suspended on the wall of his private laboratory, could be made to move by will-force. To test this he had used as conductors, wire of various metals, simple and compound, and tubes containing different fluids, one end of the conductor being applied to his forehead, the other connected with the pendulum. As no results have since been published, I presume that the experiments did not succeed...

Having been acquainted with several noted American inventors, and learnt from them the psychological processes by which they severally got the first ideas of their inventions, I described these to Edison and asked him how his discoveries came to him. He said that often, perhaps while walking on Broadway with an acquaintance, and talking about quite other matters, amid the din and roar of the street, the thought would suddenly flash into his mind that such a desired thing might be accomplished in a certain way. He would hasten home, set to work on the idea, and not give it up until he had either succeeded or found the thing impracticable.[6]

On December 13 of that year, Col. Olcott went to Menlo Park, to see Edison about the phonograph.

I had bought an Edison phonograph of the original pattern, and on that evening quite a number of our members and friends, among them a Mr. Johnston, whom Edison had sent as his personal representative (he being unavoidably absent), talked into the voice-receiver messages to our then known and unknown brothers in India. The several tinfoil sheets, properly marked for identification, were carefully removed from the cylinder, packed up, and they are still kept in the Adyar Library, for the edification of future times. Among the voices kept are those of H. P. B. – a very sharp and clear record, – myself, Mr. Judge and his brother John, Prof. Alex. Wilder, Miss Sarah Cowell, two Messrs. Laffan, Mr. Clough, Mr. D. A. Curtis, Mr. Griggs, Mrs. S. R. Wells, Mrs. and Miss Amer, Dr. J. A. Weisse, Mr. Shinn, Mr. Terriss, Mr. Maynard, Mr. E. H. Johnston, Mr. O’Donovan, etc., of whom all were clever, and some very well known as authors, journalists, painters, sculptors, musicians, and in other ways.[7]

A footnote to this entry, written in 1895, tells the fate of the recordings:

Quite recently – viz., in May, 1895 – I sent these tinfoil records to Edison’s London office, to see if they might not be received on one of the modern wax cylinders and so saved for posterity. Unfortunately, nothing could be done with them, the indentations made by the voices having become almost flattened out. It is a great pity, for otherwise we might have had duplicates taken off the original, and thus have had H. P. B.’s strong voice speaking audibly at our local meetings all over the world on “White Lotus Day,” the anniversary of her death. [8]

Although a number of his views agreed with the Theosophical teachings, he was never very active in Society. As H. P. Blavatsky wrote in 1890:

Mr. Edison is a Theosophist, though not a very active one. Still, the very fact of his holding a diploma seems to inspire him with Theosophical truths.[10]

In the quote above she was referring to Edison's view of matter, which was against the current scientific ideas but in accord with the Theosophical view. Mme. Blavatsky quoted him as follows:

I do not believe that matter is inert, acted upon by an outside force. To me it seems that every atom is possessed by a certain amount of primitive intelligence: look at the thousand ways in which atoms of hydrogen combine with those of other elements. . . Do you mean to say they do this without intelligence?[11] 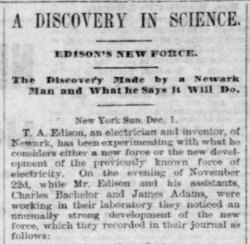 In Volume I, Chapter 5 of Isis Unveiled, Madame Blavatsky quoted an article from the New York Sun about a new natural force discovered by Edison:

Absurd and unscientific as may appear our comparison of a fictitious vril invented by the great novelist [Edward Bulwer-Lytton in his novel The Coming Race], and the primal force of the equally great experimentalist, with the kabalistic astral light, it is nevertheless the true definition of this force. Discoveries are constantly being made to corroborate the statement thus boldly put forth. Since we began to write this part of our book, an announcement has been made in a number of papers of the supposed discovery of a new force by Mr. Edison, the electrician, of Newark, New Jersey, which force seems to have little in common with electricity, or galvanism, except the principle of conductivity. If demonstrated, it may remain for a long time under some pseudonymous scientific name; but, nevertheless, it will be but one of the numerous family of children brought forth from the commencement of time by our kabalistic mother, the Astral Virgin. In fact, the discoverer says that, "it is as distinct, and has as regular laws as heat, magnetism, or electricity." The journal which contains the first account of the discovery adds that, "Mr. Edison thinks that it exists in connection with heat, and that it can also be generated by independent and as yet undiscovered means."[12]

When discussing with A. P. Sinnett about undiscovered planets in the Solar System, Master K.H. mentioned one of Edison's invention, the tasimeter, which was designed to measure infrared radiation:

Edison's tasimeter adjusted to its utmost degree of sensitiveness and attached to a large telescope may be of great use when perfected. When so attached the "tasimeter" will afford the possibility not only to measure the heat of the remotest of visible stars, but to detect by their invisible radiations stars that are unseen and otherwise undetectable, hence planets also. . . . His tasimeter, he says, "is affected by a wider range of etheric undulations than the eye can take cognizance of." Science will hear sounds from certain planets before she sees them. This is a prophecy. Unfortunately I am not a Planet, — not even a "planetary." Otherwise I would advise you to get a tasimeter from him and thus avoid me the trouble of writing to you.[13]

In 1931 Karl Jansky built the first radio telescope, and five years later, amateur astronomer Grote Reber applied this technique in the first application of a new branch of astronomy that became known as radio astronomy.[14] Thus, the Master's prophecy was fulfilled about 50 years later. However, Edison was the first scientist on record to have proposed an experiment to detect radio waves from the Sun, in 1890.[15]