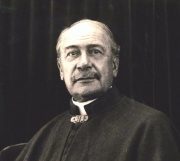 William H. Dower was the co-founder with Francia A. La Due of the Temple of the People, an international Theosophical group based in Halcyon, California.

William Dower was born in New York on March 22, 1866 of a German immigrant father, Henry C. Dauer, and American mother Willimina. He attended Syracuse University and became a physician. After an early marriage and divorce, he married a member of the Temple of the People, Jane Kent (1874-1933), around the year 1900. Their daughter Flamore was born on January 2, 1919. Jane died on September 24, 1933, and the doctor married again, to Pearl Frances Wilshire. After he died on October 5, 1937, Pearl adopted Flamore.[1][2][3]

Flamore died on January 21, 1982 and was buried, like her parents, at Halcyon Cemetery.

Dr. Dower wrote articles, pamphlets, and books. Some were translated into French and German.

Coauthored with Francia A. La Due