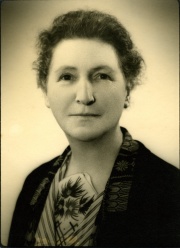 Mary Katherine Neff (September 7, 1877 - December 10, 1948) was an American Theosophist of the Theosophical Society based in Adyar, India, known as an educator, lecturer, and historian. She was born in Akron, Ohio. After teaching in that city for fifteen years, she traveled extensively in India, learning to speak Hindi and Urdu, followed by eight years in Australia. 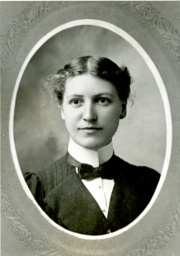 In 1911, just before leaving for India for the first time.

During much of her life, Miss Neff was involved in education as a teacher and administrator, beginning with fifteen years in the public schools of Akron, Ohio.[1]

It was only natural that her experience would be put to good use in India:

Dr. Besant, having at this time [1913] organised a large number of schools and colleges under the Theosophical Educational Trust, Miss Neff, through her training as a teacher, found a new avenue for her abilities, first as head of the business department of the Boys' High School at Madanapelle; she then took charge of the Vasanta Ashrama, a boarding school for girls in Benares. A year later, the Municipality of Lucknow invited her to act as Principal of the Middle School for Girls in the Kashmiri Mohalla of that city, where she remained for five years, raising the school to the status of a High School and introducing many reforms.[2][3]

The Society for the Promotion of National Education took over the Theosophical Educational Trust schools around 1918, and Miss Neff became active in that organization. During her years at Lucknow, she organized a Women’s Anti-Tuberculosis League and also was Superintendent of the Lady Students’ Hostel at King George’s Medical College for two years. She described her time teaching in in India:

In India she once was called upon to take over the principal's post in a school for Mohammedan and Hindu girls in Lucknow. The Mohammedan "purdah" or seclusion of women customs and the Hindu system of caste had been major obstacles to setting up community projects within the school. "But I decided I might as well start breaking some of the rules and get it over with," she said. She recalled as one of the most amusing incidents of her busy life the "sir" that was always bestowed on her while she taught typing and shorthand in a boys' high school in India. "Although the boys there had never straightened out genders, one of the nicest compliments I ever received was: 'Ah, sir, what a gallant woman you are,' " she concluded with a laugh.[4]

In 1922, needing a change in climate after long residency in the tropics, she accepted a position assisting Dr. J. J. van der Leeuw in King Arthur’s School at the Manor in North Sydney, Australia.[5][6]

In 1911 she received her first passport, in preparation for her first journey to India.[7] Photographs from her collection show a journey to Nepal in October 1914. She visited Kapilavastu, the childhood home of Buddha, and the villages of Lahari Kudan and Ronagai.[8]

Miss Neff's experiences in other continents provided useful topics for her lectures. A press release for her lecture tours provides this description of her travels:

Though born in our country, Mary K. Neff, Lecturer for The Theosophical Society in America, feels quite at home on both sides, or one might say all sides, of our earth. She has lived for fifteen years in India, for eight years as a resident of Australia, and during those twenty-three years hers has been an extraordinary career of service and adventure...

Carried from her flooded and falling house by a Mohammadan servant, Miss Neff aided government authorities in rescue work during the flood of the Gompti River in 1915. Safely established in a cell of the Prison Hospital, each day she ventured forth in a row boat, carrying a bicycle in order that she might take charge of a camp of some six thousand refugees who were marooned in a palace tomb of the Nawabs of Oudh. For a month she kept this strange assortment of human beings, goats, chickens and ducks, in a sanitary condition and saw to the supplying of food and water. She has knowledge of India life and Indian women such as is attained by few missionaries, having made herself conversant with two Indian languages, Hindu and Hindustani or Urdu. ...

As a Theosophist and a student of comparative religion, Miss Neff is perhaps the only woman to have visited the birth places of the founders of three great religions: The Christ at Bethlehem, Palestine, Shri Krishna at Brindaban, India, and the Lord Buddha in the Terai of Nepal in the Himalaya mountains.

As she and two other ladies, an Englishwoman and a Hindu girl, were making their way on elephants, from village to village in search of the modern Rumindei, near the site of the ancient garden-palace where the Lord Buddha was born, whole villages followed their caravan shouting, "Memsahab! Memsahab! - White women! White women!" - for the village folk had seen no white women previous to this visit.[9]

These photographs are from her personal collection:[10] 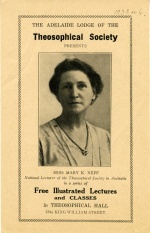 Flyer from a lecture tour. Image from TSA Archives.

From 1911-1913, during her first visit to India, she resided at the Adyar headquarters and worked in the Theosophical Publishing House, the Adyar Library and Research Centre, and for a time was private secretary to Charles W. Leadbeater. Clara Codd, who was at Adyar from 1910-1911, wrote that her friend Mary would join in group entertainments by reciting a comic verse about "The googlies will catch you if you don't watch out."[13]

Miss Neff was tall and straight with golden hair and merry blue eyes. She would take her sewing things round to the rooms of the solitary men on Saturdays and mend their socks and sew on buttons for them. She was always smiling, always unfailingly cheerful, so we nicknamed her 'Sunny Jim.'[14]

On June 19, 1916, Miss Neff transferred her membership from the American Section to the Indian Section, and did not transfer back again until May 13, 1939 after a long stint abroad.[15]

For two years she served as Assistant General Secretary and for two years National Lecturer for the Australian Section of the Theosophical Society.[16] "At Sydney she assisted Dr. van der Leeuw for a year in King Arthur's School at the Manor; then she assisted Dr. Mary Rocke in the building of the Star Amphitheatre, at Balmoral, securing plans from the architect of the great Berkeley Amphitheatre at San Francisco. which were adapted to the smaller building at Balmoral."[17]

In 1927 she returned to Adyar to catalog the archives for two years, making her thoroughly familiar with the history of the Society. Among her contributions to the Archives work was an index to H.P.B.'s scrapbooks, and a chronology of the Mahatma Letters developed by reference to Colonel Olcott's diaries.[18] After that she again worked as secretary to Leadbeater.[19][20] A 1930 visit to the United States took her to the TSA headquarters in Wheaton, Illinois.[21]

Miss Neff was a much-sought lecturer who toured the United States, Australia, and New Zealand speaking about Theosophy on behalf of the Society and giving public lectures about her travels. These are some of the stops on her tours when she was a national lecturer in Australia and in the United States:

American and Australian members were enthusiastic about her visits. The Detroit Lodge reported, "One of the happiest events of Miss Neff's stay was a tea for members only, at which she held forth in her usual informal way, making us all feel like important members of the Theosophical family."[24] The Middle Atlantic Federation called her visit delightful: "smiling, courteous, and congenial, she seemed like an old friend... Miss Neff is a born teacher, presenting her theme in a clear and convincing manner."[25] 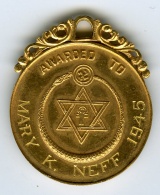 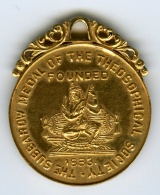 Reverse side of medal

In 1944 she was awarded the Subba Row Medal in recognition of her contributions to Theosophical literature, and in particular, How Theosophy Came to Australia and New Zealand.[26]

Numerous articles by and about Miss Neff may be located in the Union Index to Theosophical Periodicals using this search. 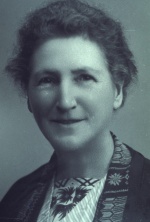 During her fifth and last trip to Australia, 1941-1945, Miss Neff worked with the armed forces. When she returned to the United States shortly before the end of World War II, the ship was filled with war brides, children, and wounded soldiers. After about 18 years in India and 12 in Australia, she retired to study and write.[27] Her longtime coworker, Mr. Jinarājadāsa, said in a presidential address shortly after her death,

She was compiling during her stay in Australia additional material which she found in the public library in Melbourne dealing with more incidents in H.P.S.'s life. The manuscript of the second volume, at which she was working till the end, will no doubt be given presently to our Society and in the course of time I hope to publish it. From the beginning to the end Mary Neff remained a true and faithful worker in our cause.[28].

Beginning in 1945, her final home was in Ojai, California. She died on December 10, 1948 after a lengthy illness. Her library and notebooks were left to the Theosophical Society in America, where they remain in the Henry S. Olcott Memorial Library and the Archives Department.[29][30] Her second volume of H. P. B. material was never published.