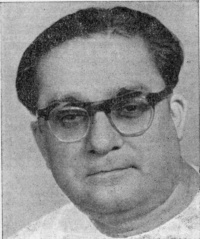 Rohit Mehta was an Indian Theosophist well known for his work as an educator, lecturer, writer, and social activist who worked with Mahatma Gandhi. He served as International Secretary of the Theosophical Society, and as General Secretary of the Indian Section.

Rohit Mehta was born on August 3, 1908 at Surat in the family of Hasmanram, a professor of physics at the Elphinstone College, Bombay. He was educated in Bombay, Surat, and Ahmedabad, India.

While attending Gujarat College in Ahmedabad, the 18-year-old led a student strike that lasted three months, over a rule prohibiting political activity by students. From 1926 to 1934, young Mehta was jailed five times for his political activities with Gandhi, including participation in the famous Salt March. In 1934, he was sentenced to a two-year term of hard labor at the Ahmednagar Fort:

The heat and hard work in breaking stones there led to a terrible illness. He suffered a sun-stroke and then was partly paralysed. The alarmed authorities rushed him to the KEM Hospital in Bombay under the care of Dr Jivraj Mehta, who was to later become the first chief minister of Gujarat.
Rohitbhai had refused even to go on parole but the Mahatma intervened. According to Prof Bababhai Patel, a Congress worker, Jamnadas Dwarkadas took J. Krishnamurti to see the ailing Rohitbhai ["Brother Rohit" in Hindi]. Krishnamurti kept his hand on the parts of the sick man’s body wherever it was paining. The therapeutic touch is said to have cured Rohitbhai completely. He walked next day, and was discharged from the hospital soon.[1] 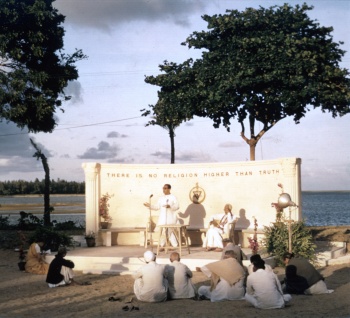 Around 1936, Mr. Mehta came to see the political realm as soulless, and took up study of the works of Theosophy and Krishnamurti. He wrote of this change in his consciousness in A New World of Theosophical Socialism, in which he predicted the decline of Communism in the Soviet Union. In 1941, he went to Adyar in Tamil Nadu to work as recording secretary of the Theosophical Society, and soon became the International Secretary, serving until 1945. After that term, he took on the responsibility of being General Secretary of the Indian Section from 1945 until 1959.

He could speak fluently in English, Hindi and Gujarati, and was much in demand for lecture tours in Europe, Asia, Africa, and North America. He and his wife made a nine-week tour of East Africa, including Tanganyika, Uganda, Belgian Congo, Kenya and Zanzibar. "Huge audiences heard them at 137 meetings held in 24 communities and 80 new members were admitted to the Society."[2] He recognized that the Indian Section could play a useful role in bringing together racial and ethnic groups in East Africa. In 1985 he toured the Eastern and Midwestern lodges of the United States, and on September 14 was the featured speaker at a special seminar entitled "The Way of the Upanishads" at the American headquarters.[3][4]

[He] is at present [in 1958] Secretary of two Theosophical educational institutions functioning at the Indian Headquarters of the Society in Varanasi - The Besant Theosophical School for boys (over 700 students), and a girls' college (nearly 500 students) - and is also Secretary of the Besant Education Fellowship. He was for some time a member of the Rishi Valley Trust, which controlled various education institutions working under the guidence of J. Krishnamurti.[5] 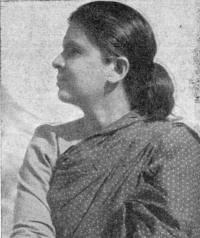 The University of Lugano in Switzerland awarded him an honorary doctorate.

Rohit Mehta was married to Shridevi Mehta. The Mehtas were effective partners in their theosophical work. She sang bhajans and hymns at his lectures, and his words illustrated the meaning of the music. Professor P. G. Mavalankar recalled that Mehta would advise the audience before his talks, “You cannot leave while Shridevi is singing the bhajan. However, you can leave when I am talking.” Hardly anybody would go.[6]

An accomplished speaker, Mrs. Mehta holds a graduate's degree in music and has arranged many musical and cultural functions in India. An active worker for The Theosophical Society, she was Secretary of the All-India Federation of Young Theosophists from 1945 to 1950. She has travelled extensively in India and lectured on various subjects, particularly of a cultural and spiritual nature. She has also lectured in East Africa and Ceylon, and during her husband's trip abroad in 1956 acted in his place as General Secretary of The Theosophical Society in India.

Mrs. Mehta is editor of a Hindi Theosophical Journal, and also author of a number of Theosophical books in the Hindi language. She has contributed articles to English Theosophical journals and has lectured at many Theosophical conferences. She is at present [in 1958] in charge of a music-dance college at The Theosophical headquarters for India in Varanasi and also is in charge of hostels for girls and boys who attend the educational institutions there. She has been a member of the National Council of The Theosophical Society in India since 1945..

Mrs. Mehta will speak on Theospohical and cultural subjects during her visit to Australia, and hopes to bring her tambura - an Indian stringed instrument - to demonstrate Indian music.[7]

When not on lecture tours, the Mehtas lived at Varanasi. Mr. Mehta passed away there on March 20, 1995.

Friends Bhaskar and Rajni Vayas told of his final days in an account that has been paraphrased here:

He was staying in the campus of Theosophical Society till his last breath. His wife Shreedeviben was in bed because of an attack of paralysis. She also passed away in the same house and same year in 22/8/1995. Then the house was handed over back to society. He had huge collection of books on various subjects. Of that few were sent to the Vayas’, who have read them and preserved them as priceless property. They know that a close circle of friends performed his last rites at Varanasi as per cremation with fire.[8]

Dr. Mehta contributed greatly to Theosophical literature. He wrote at least 31 English-language books and pamphlets, with multiple printings and editions. Some editions were in Hindi, Gujarati, Dutch, and Finnish. In 1955, he was awarded the Subba Row Medal for his contributions to theosophical literature. This listing is in alphabetic order:

In addition, Mehta wrote numerous articles, including these:

More information about his writings can be found in a Theosophy in Australia article "An Overview of the Works of Rohit Mehta" by Patricia Ossenberg. It is available at the website of the Theosophical Society in Australia.[9]