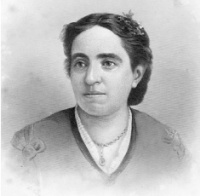 Mrs. Mary J. Hollis Billing was a remarkable American medium and member of the Theosophical Society. Master K.H. said that "among mediums she is the most honest if not the best".[1] She had two spirit guides who talked freely in direct voice: "James Nolan" and an Indian named "Ski".

Mary Judith Kerns was born on April 24, 1837, at Jeffersonville, Indiana to Nicholas and Elizabeth Kerns. She married Ephraim J Hollis (1829-1910) in 1855. He was a captain during the Civil War, and worked as a railroad clerk.[2] The family lived in Indiana and in Louisville, Kentucky. There were several children: Ira, Anna, Winifred, Sarah, and Helene.[3] As of May, 1873, Mary was living in Louisville, Kentucky, still the wife of Ephraim, when she applied for a passport.[4]

She seems to have married Dr. Henry J. Billing in 1877, although no records are available for a divorce from Ephraim and marriage to Billing.

During her later years she lived with her daughter Helene's family in the Bronx, New York. They were Morgan and Helene Goldsmith, with three daughters. Mrs. Hollis Billing died on July 14, 1908 in Bronx, New York.[5]

Mrs. Billing was active in the formation of the London Lodge but did not join it, preferring to retain her membership in the Parent Society. At that time (1877), if a member of the Parent Society joined a branch, membership in the former was forfeited (SH, p. 103). When HSO composed his first circular explaining the origin and plan of the TS and the aims for which it stood Mrs. Billing took a packet of these circulars to London (SH, pp. 104-5). When the Founders went to England in 1879 enroute to India they stayed with Dr. and Mrs. Billing for a time (SH, p. 123). At an election of officers in London Lodge on January 5, 1879, Dr. Billing was elected one of the two vice-presidents (SH, p. 124). Of Dr. Billing, ML-54 (92), pp. 301-2, has some rather severe things to say.[6]

On October 13, 1887, the Religio-Philosophical Journal began a series of interviews with questions placed by a reporter to the "control" named Jim Nolan. The interviews took place at 24 Ogden Avenue in Chicago and dealt heavily with the nature of materialization.[7]

Ski (short for "Skiwaukie") was an Indian spirit guide of Mrs. Hollis Billing. It seems that he was a good influence to her. In one of his letters, Master K.H. wrote:

She has been a loyal member of the Society from the time she joined it, . . . She also, unless closely watched by "Ski" can turn a traitor — precisely because she is a medium, though it is not likely she would do it — withal she is incapable of either a falsehood or deceit in her normal state.[8]

He was also occasionally used by the Masters to deliver messages. Again, in the words of the Master:

Suffice then for me to say that "Ski" has more than once served as carrier and even mouthpiece for several of us.[9]

However, as seems to be frequently the case with spirit guides, there were several entities acting under that name, as can be gathered from the Master's statement as to "the shortcomings and crimes of several other "Skis" having been fathered on the real "Ski," and Mr. Massey unable to recognise one from the other".[10]