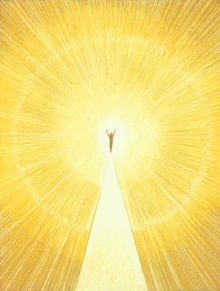 Monad is a term derived from the Greek μονάς (monas) which means "unit" or "one"; that which has no parts. With the Pythagoreans, "monad" was a term for the Divinity--the source of everything, referred to as "the One." German philosopher Leibniz talked about "monads" as the indivisible soul-like particles that are the ultimate elements of the universe. In Theosophy, the word "monad" generally refers to the divine spark, comprised by the two highest Principles, ātman and buddhi, which during the process of human evolution assimilate the highest attributes of manas.

In the manifested universe, the Monad appears as a composed unity of the three higher principles. However, the Monad exists as a Unity beyond the highest manifested plane. Mme. Blavatsky wrote:

The monad, then, viewed as ONE, is above the seventh principle (in Kosmos and man), and as a triad, it is the direct radiant progeny of the said compound UNIT.[1]

At the beginning of the evolution the manifested Monad consists of two principles:

This dual monad which, during the process of evolution will gradually individualize in triple Monads, is said to be part of the Dhyāni-Chohans:

The Monad of every living being . . . is an individual Dhyan Chohan, distinct from others, a kind of spiritual individuality of its own, during one special Manvantara. Its Primary, the Spirit (Atman) is one, of course, with Paramatma (the one Universal Spirit), but the vehicle (Vahan) it is enshrined in, the Buddhi, is part and parcel of that Dhyan-Chohanic Essence.[3]

Ātman and buddhi being universal principles, the dual Monad is omnipresent and cannot be said to be a "property" of human beings:

Âtma and Buddhi cannot be predicated as having anything to do with a man, except that man is immersed in them. So long as he lives he is overshadowed by these two; but it is no more the property of that than of anything else.[4]

The universal dual Monad is not endowed with individual consciousness:

The sixth and seventh principles apart from the rest constitute the eternal, imperishable, but also unconscious “Monad.”[5]

In this state, the Monad is said to remain unmanifested:

Pythagoras had a reason for never using the finite, useless figure — 2, and for altogether discarding it. The ONE, can, when manifesting, become only 3. The unmanifested when a simple duality remains passive and concealed. The dual monad (the 7th and 6th principles) has, in order to manifest itself as a Logos, the "Kwan-shai-yin" to first become a triad.[6]

Compelled by the circle of necessity, the dual monad engages in a process of evolution through the lower kingdoms until it reaches the human stage:

Monad [is] that immortal part of man which reincarnates in the lower kingdoms, and gradually progresses through them to Man and then to the final goal— Nirvâna.[7]

After the unconscious and universal dual Monad evolves through the lower kingdoms it reaches the human. Here, as the Monad gets in touch with manas, it develops a consciousness that is able to function on the lower planes. Mme. Blavatsky wrote:

The Monad is impersonal and a god per se, albeit unconscious on this plane. For, divorced from its third (often called fifth) principle, Manas, which is the horizontal line of the first manifested triangle or trinity, it can have no consciousness or perception of things on this earthly plane. “The highest sees through the eye of the lowest” in the manifested world; Purusha (Spirit) remains blind without the help of Prakrit (matter) in the material spheres; and so does Atma-Buddhi without Manas.[8]

Buddhi being the first differentiation, the first ray, it is universal consciousness, and could not act on any one plane, especially on the terrestrial plane. And to be conscious of something, of somebody, it must have Manas, that is to say, the consciousness of this plane.[9]

It is by absorbing the highest attributes of manas that the dual Monad becomes conscious:

To awaken in it [the Monad] to life the latent consciousness, especially that of personal individuality, requires the monad plus the highest attributes of the fifth [principle].[10]

In Isis Unveiled the "astral monad" is mentioned in relation to the concept of reincarnation.[11] Because these passages brought a controversy, the Mahatma K.H. had to explain in one of his letters that they "recognise in the astral monad the personal Ego", adding that the "personal, or astral monad, the "moi fluidique" [is] the manas, or the intellectual mind, the 5th principle".[12]

The concept of "Monad" seems to have been conceived by the Pythagoreans. It refers to a single source and indivisible origin for all the diversity in the universe. With them, the Monad was the divinity, the first being, or the totality of all beings.

In the Pythagorean description of the process of manifestation, the Monad is the first thing that came into existence. This begat the dyad (duality), from which came all the numbers (as abstract entities). From numbers came points; then lines, two-dimensional entities, three-dimensional entities, bodies, culminating in the four elements earth, water, fire and air, from which the rest of our world is built up.

Gottfried Wilhelm Leibniz (July 1, 1646 – November 14, 1716) was a German mathematician and philosopher. His best known contribution to metaphysics is his theory of simple substances or monads, published in his book Monadology. According to Leibniz, monads are elementary particles, being the ultimate elements of the universe. They are "substantial forms of being" with blurred perception of each other. The monads are centers of force, of which space, matter, and motion are merely phenomena. They are eternal, indecomposable, individual, subject to their own laws, un-interacting, and each reflecting the entire universe in a pre-established harmony.