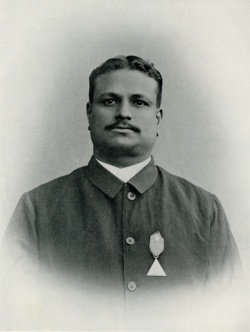 Pandharinath Kashinath Telang was an Indian Theosophist and educator.

Professor Telang was an Indian Theosophist of the Brahmin caste, son of Justice Kashinath Trimbak Telang. He earned a Master of Arts degree and a Bachelor of Laws, and became an educator. In 1909 he joined Central Hindu College, and also served as Principal of the Theosophical College and the Theosophical National Boys School in Benares. He died on June 5, 1929.[1]

Professor Telang served on the General Council of the Theosophical Society. He helped to edit New India. In 1925, he worked with Pandit A. Mahādeva Sāstri, Jiddu Krishnamurti, and other Brahmins to develop the Bhārata Samāj Pūja ritual of congregational worship.

The Union Index of Theosophical Periodicals lists two articles by or about Pandharinath Telang and seven more under PK Telang.

Prof. P. K. Telang was closely associated with Annie Besant. He was a distinguished educationist for The Annie Besant School. He also worked together with Annie Besant on the system of self-government along with prominent leaders such as Tej Bahadur Sapru, Sarojini Naidu, N. C. Kelkar, M. A. Jinnah. Motilal Nehru and C. P. Ramaswami Iyer. In 1925 he served on a distinguished committee to select Indian students who might benefit from further education in the United States, and Annie Besant asked American members to help.[2]

In memory of his father, in 1917, Professor Telang donated "a small but precious collection" that formed the core of what is now The Banaras Hindu University Library system. The collection was initially housed in the Telang Hall of the Central Hindu College, Kamachha, but was eventually shifted to its present majestic building modeled after the British Museum Library. The library has expanded greatly, attracting major donations from the Nehru and Tagore families and other benefactors.[3]