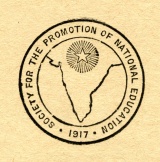 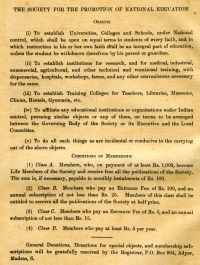 The Society for the Promotion of National Education was an organization established in 1916 in India to support the development of schools based in Indian languages, religions, and customs. Staff and members of the Theosophical Society based in Adyar, Chennai, India were heavily engaged in every aspect of SPNE's operation, although the two organizations were not legally connected. The participants were motivated by the desire to serve the Indian people and to prepare India to prepare for independence.

The growth of the Society was greatly accelerated by an action of Theosophical Educational Trust. At its annual meeting on December 27, 1916, the Trust "resolved to make a present to the Society of its colleges and schools as far as possible." TS President Annie Besant was given authority to determine when and how the educational institutions should be transferred to the governance of the Society. "By thus immolating itself upon the altar of the National need the Trust gave the lead and supplied that spiritual note which must be and is the basis of the work of all of us, founding the new movement upon a willingness to sacrifice."[1] 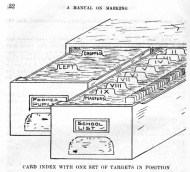