Tallapragada Subba Row (July 6, 1856-June 24, 1890) was a brilliant Advaita Vedantist who became an early Theosophist. A strict Brahman, he was trained as a Vakil (Pleader) within the Indian justice system, a highly profitable profession. He practiced law at Madras. In 1882, after corresponding with H. P. Blavatsky, Colonel H. S. Olcott and Damodar K. Mavalankar, he became a member of the Theosophical Society. Subba Row resigned from the Society in 1886 when an appeal was made to HPB by forty-five prominent members of the American Section to publish The Secret Doctrine without delay.

Subba Row had initial problems with instructing non-Hindus. It was his distinct belief at the time that Hindu knowledge should remain with India, and not be extended to foreigners. In fact, even after passing over this hurdle, he was still especially private regarding his spiritual life, even to his mother and close friends. Unless the person he was speaking to had a deep understanding of mysticism, it was a fairly mute topic for him.

For several crucial years, Subba Row was instrumental in establishing Theosophy in India. By the end of 1886 Mme. Blavatsky sent him the first draft of The Secret Doctrine, hoping that he would be a co-editor it and add his knowledge of Hinduism. But upon reading it, Subba Row would not work on it as originally agreed upon because, as he said, there were so many errors he would have to rewrite it.

At the request of Madame Blavatsky, and with the concurrence of Mahatma Morya Mr. Subba Row considered instructing A. P. Sinnett in occult matters. Several letters related to this matter were collected in The Mahatma Letters to A. P. Sinnett. Subba Row's guru, Mahatma Morya, told Sinnett to "have patience with Subba Row. Give him time. He is now at his tapas and will not be disturbed. I will tell him not to neglect you but he is very jealous and regards teaching an Englishman as a sacrilege."[1]

Mahatma Letter No. 58 (number 130 in the Barker system) was mailed on May 7, 1882 from Madras where Subba Row was editing The Theosophist in HPB's absence. In it he introduced himself to A. P. Sinnett, stated conditions under which instruction could take place, and asked whether Sinnett was familiar with Sanskrit.

Joy Mills states, "We know that Sinnett answered Subba Row's letter, although we do not know precisely how he replied. Subba Row sent the reply on to M, perhaps with a cover letter similar to the one addressed to HPB, extracts of which KH sent to Sinnett. It is clear that KH also read Sinnett's response to Subba Row." Mahatma Koot Hoomi seems to have regarded the prospect of Sinnett receiving instruction from Subba Row with skepticism, as in [[Mahatma Letter No. 59............

The qualified assent which you were pleased to give to the conditions laid down by me necessitated a reference to the Brothers for their opinion and orders. And now I am sorry to inform you that anything like practical instruction in the ritual of Occult Science is impossible under the conditions you propose. So far as my knowledge goes, no student of Occult Philosophy has ever succeeded in developing his psychic powers without leading the life prescribed for such students; and it is not within the power of the teacher to make an exception in the case of any student. The rules laid down by the ancient teachers of Occult Science are inflexible; and it is not left to the discretion of any teacher either to enforce them or not to enforce them according to the nature of the existing circumstances. If you find it impracticable to change the present mode of your life, you cannot but wait for practical instruction until you are in a position to make such sacrifices as Occult Science demands; and for the present you must be satisfied with such theoretical instruction as it may be possible to give you.

In Dec. 1885 Subba Row delivered a lecture on the Bhagavad Gita at the Convention of the Theosophical Society held in Adyar, Madras. The lecture, entitled "Introductory," was published in the February 1886 issue of The Theosophist. In this lecture Subba Row criticized the Theosophical concept about the septenary constitution of the universe and human beings. The philosophical controversy began in April, 1887, when H. P. Blavatsky publishes in the same journal the article "Classification of Principles." This resulted in a number of remarkable articles between the two occultists discussing the subject as presented in the teachings of the trans-Himalayan School and the Târaka Râja Yoga’s.

Subba Row, as an orthodox Brahmin, was critical of Blavatsky's disclosure of certain hitherto esoteric teachings. In 1888, he resigned from the Theosophical Society along with J. N. Cook. Thereafter he fell gravely ill when he contracted a cutaneous disease, a sickness which manifested itself in an outbreak of boils in 1890 during his last visit to the Theosophical Society's headquarters in Madras. Despite the healing treatment by Henry S. Olcott he eventually died on June 24, 1890, saying that his guru had called him, and that it was time for his departure. He was cremated the morning after as per Hindu tradition. Although he was a member for only about four years, he influenced significantly the Society and left an important legacy of esoteric teachings.

The 1883 Convention established the Subba Row Medal, to be awarded to writers of works of outstanding merit on Eastern and Western philosophy. 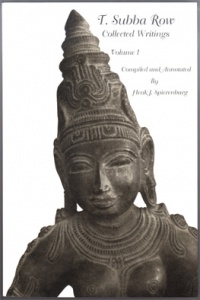