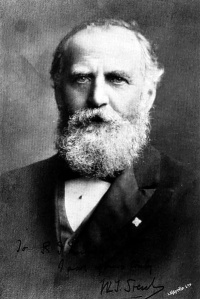 William Thomas Stead (1849-1912), usually known as "W. T. Stead," was a prominent investigative journalist in Victorian England. He was a friend of Annie Besant before she became associated with the Theosophical Society. After he asked her to write an article about The Secret Doctrine for his journal Review of Reviews, she became a Theosophist.

For nine years, Stead edited the Darlington Northern Echo, and then, from 1880-1889, he was assistant editor of the Pall Mall Gazette in London. His radical views and social activism often triggered opposition. He founded Review of Reviews in 1890, and from 1893-1897 also produced the spiritualist magazine Borderland. He experienced several strong premonitions, and one such experience, on January 1, 1880, made him believe that he would find a new position in London, which seemed unlikely but came true.[1][2]

Stead boarded the Titanic for a visit to the United States to take part in a peace congress at Carnegie Hall at the request of William Howard Taft, and died on April 15, 1912, when it sank. It is reported that after the ship struck the iceberg, Stead helped several women and children into the lifeboats, in an act "typical of his generosity, courage, and humanity", and gave his life jacket to another passenger. Stead had often claimed that he would die from either lynching or drowning.[3]

A later sighting of Stead, by survivor Philip Mock, has him clinging to a raft with John Jacob Astor IV. "Their feet became frozen," reported Mock, "and they were compelled to release their hold. Both were drowned." William Stead's body was not recovered.[4]