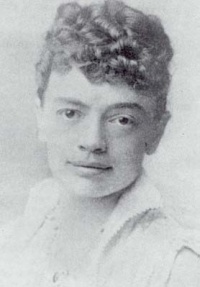 Julia Wharton Lewis Campbell Ver Planck was married to Dr. Archibald Keightley. The Keightleys were active in the Theosophical Society in America, later renamed Theosophical Society, which was headed by Ernest Temple Hargrove in New York. She is best known for her writings under the pseudonym Jasper Niemand.

Julia Wharton Lewis Campbell was born into a distinguished Philadelphia family as the daughter of Judge James. W. Campbell.[1]

Mrs. Ver Planck joined the Aryan Lodge (in New York City) of the Theosophical Society on May 27, 1886. Her membership in the Adyar-based Society ended on April 28, 1895 when most American lodges withdrew and formed their own American organization.[3]

Encounter with a Mahatma

A few days after Madame Blavatsky died, HPB awoke me at night. I raised myself, feeling no surprise, but only the sweet accustomed pleasure. She held my eyes with her leonine gaze. Then she grew thinner, taller, her shape became masculine; slowly then her features changed, until a man of height and rugged powers stood before me, the last vestige of her features melting into his, until the leonine gaze, the progressed radiance of her glance alone remained. The man lifted his head and said, "Bear witness!" He then walked from the room, laying his hand on the portrait of HPB as he passed. Since then, he has come to me several times, with instructions, in broad daylight while I was busily working, and once he stepped out from a large portrait of HPB.[4]

Mrs. Keightley wrote extensively under the pseudonym Jasper Niemand. Jasper means "master of the treasure" and Niemand is German for "nobody."

Jasper Niemand wrote numerous articles for Theosophical periodicals, including The Path, The Lamp, Lucifer, Theosophia, and Theosophical Quarterly. Union Index of Theosophical Periodicals lists at least 140 articles under that pseudonym.