Difference between revisions of "Adyar (campus)"

Adyar is the name by which the headquarters estate of the Theosophical Society has been known since 1882. 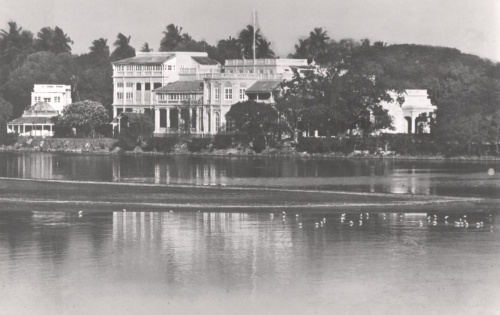 Purchase of the estate

On April 23, 1882, the Founders, Helena Petrovna Blavatsky and Henry Steel Olcott, arrived by ship at Madras, where they met T. Subba Row, Judge G. Muthuswamy Chetty and his sons G. Soobiah Chetty and G. Narasimhulu Chetty, Ragunath Row, among others.

THEOSOPHISM AT MADRAS. — Madame Blavatsky and Colonel Olcott, the well-known founders of the Theosophical Society in Bombay, arrived at Madras on Sunday morning at nine o'clock. In anticipation of their arrival, the natives assembled, and made arrangements to give their visitors a formal reception at five o'clock in the evening. Accordingly, at the hour fixed, the native community mustered strong at the pier, among whom were the Hon'ble Rajah Gajapathi Row, the Dewan Bahadur Ragunatha Row, and several leading members and merchants of the community. Boats went out to meet the steamer, the one destined for the visitors tastefully decorated. After an interchange of compliments and much cheering, the visitors were ushered into a saloon carriage, afterwards to a carriage and four, and driven to the residence fitted up for them. . . . The Deputy Inspector of Schools read the following address: ”We, the undersigned, who entertain great respect for you, welcome you to the capital of Southern India. We need hardly express our appreciation of your valuable services for our country, and we trust that your advent here will be a means of placing within our reach the advantages afforded for investigating the mysteries of nature and psychical powers latent in man".[1]

While the Founders were there, the Madras Theosophical Society was formed, and the idea of moving the Headquarters from Bombay to Madras (previously suggested by G. Soobiah Chetty) was discussed at a meeting. 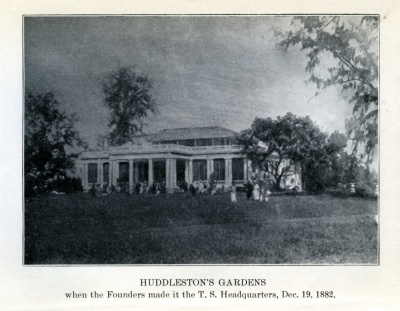 On May 31 the Chetty brothers took them to see a piece of property they recommended as the new headquarters site for the Theosophical Society: the "Huddlestone's Gardens". The Huddlestone family had been granted some property south of the Adyar River in the late 1780s, on which they built a country or "garden" house. But now the twenty-seven-acre property, containing a large house, two cottages, and other facilities, was on sale.

When the Founders saw the Huddlestone's Gardens Mme. Blavatsky declared "Master wants this purchased". Col. Olcott wrote that "at first glance [we] knew that our future home was found".

The Society had not enough funds to purchase the property but the necessary sum was advanced by a devoted member, P. Iyaloo Naidu. Then, a circular to collect donations from members was issued. On November 17, exactly seven years after the founding of the Theosophical Society, the final balance of Rs. 7,000 was paid by Judge G. Muthuswamy Chetty. This completed the sale and the title to the property passed to the Society.[2]

On December 17 the Founders left Bombay by train heading for Adyar, accompanied by the Emma and Alexis Coulomb, Damodar, "Mr. Deb", Dora Swami Naidu, and five Hindu servants. They arrived on the 19th. On January 14, 1883, Col. Olcott issued a circular regarding how Adyar was bought and paid for.

Growth of the estate

Early in the presidency of Annie Besant, she accepted the gift of land that was named Besant Grove:

JUST before leaving Adyar I received a very nice parting present. A friend, who withholds his name, purchased the plot of land of about twenty acres which occupies the corner where the Adyar river runs into the sea, being bounded thus on two sides by water, and which has as its southern boundary Olcott Gardens and as its western Blavatsky Gardens. This plot he has presented to me, labelling it Besant Grove. I have accepted it, in order to hand it over to the Theosophical Society, and it forms a very valuable addition to the Headquarters' property, completing the parallelo gram marked out by river, sea, and high-roads.[3]

Adyar as an administrative center

The Vasanṭā Press was established in 1909 by Annie Besant. It moved to its current location in 1968. The press prints books, pamphlets, and other publications produced by the Theosophical Publishing House, the Adyar Library and Research Centre, and allied organizations.

Editorial Office for The Theosophist

Adyar as a spiritual center

Provides a home for over 25 boys who are in need. They are students of the Olcott Memorial School.

The Social Welfare Centre takes care of around 100 infants, with free nutrition, clothes, pre-school training, and other services.

The dispensary is an outreach program for animal welfare run by the Theosophical Society in Besant Nagar, Chennai since about 1990. It provides treatment daily to more than 30 animals a day. Injured and abandoned animals are treated free of charge, and vaccinations are available.

Features of the grounds

Three carved stone gateways occupy prominent positions at Adyar. Colonel Olcott expressed his thanks at the 1905 Convention to:

Pandits G. Krishna Shastri, K. Desikacharya, T. P. Prasramacharya, and C. Raghunathacharya for securing the gateways from the ancient ruined temple in the Arcot District and to Mr. T. Srinivas Ayengar for valuable help in carrying out the really stupendous task of getting the stones transported from that locality to Adyar without accident... An idea of the difficulties to surmount will be gathered from the fact that the two great columns of our present entrance gate, the Gate of Lions (Sinha Dvaram, in Sanskrit) weigh between six and seven tons each, and that they had to be removed from their plinths and transported a distance of four miles over a bad road and across the dried beds of two rivers to the railway station.[4]

Our Thirtieth Anniversary... occurred on the seventeenth of last month [November], and on that day a perpetual memorial of the fortuitous event was erected in these grounds in the form of the majestic carved granite portal which stands at the mouth of the Avenue of Palms which leads from the now completed library building to the Indian village..."[7]

This Indian village was named "as a token of brotherly love to Annie Besant, who has done so much to make known to the world the treasures of Aryan literature and the claims of the Aryan race to the love and homage of mankind."[11] the name "Besant" was as "Vasanta" in Tamil.

Beautiful trees and flowering plants are found throughout the Adyar estate. Many members have brought plants from other continents to add variety to the gardens.

From the earliest days, various crops have contributed to the income of the estate and the diet of the staff. Coconuts, mangoes, jackfruit and other fruits continue to be grown. For a time, there was a rice paddy. In 1952, Mr. Cook wrote, "Once again the Society has grown on its estate India's finest paddy (rice) crop, a spectacular yield per acre of 3,850 pounds of very superior grade. Experiments are in progress to bring about further improvement. This yield comes from careful election of seed and thorough tilling by the still primitive bullock-drawn ploughs in suitable soil."[12]