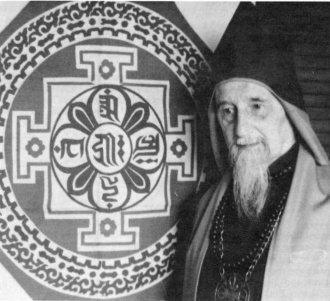 Lama Govinda. Photo printed with his obituary in The American Theosophist, March 1985.

Lama Anagarika Govinda was born Ernst Lothar Hoffman in Waldheim, Germany (old kingdom of Saxony) in 1898, the son of a German father and a Bolivian mother. He was the founder of the Buddhist Order Arya Maitreya Mandala. As a young man living in Italy, he became interested in Buddhism and meditation during the 1920s. In 1928 he moved to Ceylon (Sri Lanka) where he studied Buddhism, mastered the language of Pāli, and took his Buddhist vows. In 1931 Govinda met his Tibetan guru, Tomo Geshe Rinpoche, by whom he was initiated into the Gelug-pa sect. He spent the next thirty years in northern India, while finding time to make several trips to Tibet during the early 1930s and again in 1948-49. In 1960 he began his worldwide travels, speaking on Buddhism to audiences in Europe, North America, Japan, South Africa, Southeast Asia, and the Philippines.

According to Dora Kunz, Lama Govinda was raised as a Christian, but was interested in all religions from early boyhood. He visited Adyar and spent time with Charles Leadbeater. He disagreed with some of Mr. Leadbeater's views on Tibet, particularly related to Wesak.[1]

Lama Govinda spent his final days, with his wife Li Gotami, at the Zen Center in Marin County, California, near San Francisco, and passed away in 1985.[2]

Lama Govinda and Li Gotami sitting on a table in Olcott Library, 1977. Photos by Floyd Kettering:

In 1977, Lama Govinda lectured at the headquarters of the Theosophical Society in America in Wheaton, Illinois, and two of his talks were recorded:

Lama Govinda was a prolific writer on Buddhism. Among his books are these:

He was also a frequent contributor to The American Theosophist:

He also wrote articles for numerous other Theosophical periodicals:

In March, 1985, The American Theosophist published a tribute to Lama Govinda:

In January of 1985 Lama Anagarika Govinda passed on. Lama Govinda was a long-time friend of the Society, a fine Sanskrit scholar and a wise and kind man. He was born in Germany and very early in life embraced Buddhism. He studied in many European universities, but his dedication to Buddhism led him to India where he finally joined the Tibetan Buddhist order of monks. His greatest literary achievement was The Foundations of Tibetan Mysticism, an outstanding contribution to Tibetan studies and beautifully written. After living for many years in the Himalayas, he and his wife Li Gotami, a wonderful photographer, spent the last few years at the Zen Center in Marin County, California. The community there looked after im and his wife with loving care. All of us who knew him respected him greatly. The Theosophical Publishing House published one of his last books, Creative Meditation and Multi-Dimensional Consciousness, a selection from which is reprinted in this issue of The American Theosophist. [5]