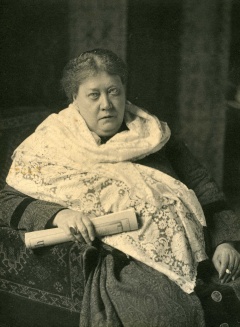 There have been two series of Blavatsky Lectures presented annually in honor of Helena Petrovna Blavatsky. The longer and better-known series is in England, and another series was instituted in South Africa.

In the "Foreword" to the published edition of the first lecture of May 1918 (E. L. Gardner, "Matter is the Shadow of Sprit"), Harold Baillie-Weaver gives an indication of the origin and potential significance of the lecture series:

The idea of an annual Blavatsky Lecture emanated from Mr. D.N. Dunlop, whose devotion to Madame Blavatsky and her writings is well known throughout the Theosophical Society, and the idea was so obviously an excellent one that prompt measures were taken by the Executive Committee to give it a concrete form.

It is doubly important that the lore and teaching contained in the writings of Mme. Blavatsky should be continually studied, discussed and interpreted; in the first place because of the vast treasures which they hold for the student of occultism, and in the second place because of the scientific theories they contain. These theories were derided when Mme. Blavatsky first enunciated them; but every advance that science makes is an advance towards admission of their truth; and it is of first importance that they should be as widely promulgated and as competently expounded as possible, so that as fresh discoveries substantiate them the profound knowledge by which they were inspired and the value of the methods by which they were obtained may be recognised.

The first Lecture, delivered by Mr. Gardner, is a worthy beginning of a great enterprise.[1]

The Blavatsky Lectures are presented annually (in most years) at the Summer School of the Theosophical Society in England, sponsored by the Blavatsky Trust.

The Union Index of Theosophical Periodicals maintains a searchable index to this periodical online, listing lecture titles and authors in chronological sequence.

At least four Annual Blavatsky Lectures were given under the auspices of the Theosophical Society in Central South Africa.[2]