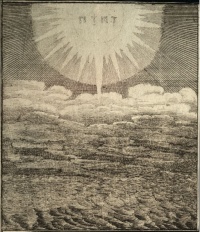 Over the face of the waters

Chaos (from the Greek χάος, khaos) means "emptiness, vast void, chasm, abyss" and in the Greek creation myths it refers to a moving, formless mass from which the cosmos and the gods originated. In Theosophy, Chaos is space filled with darkness, which is primordial matter in its pre-cosmic state.[1] It contains in itself all the Elements in their rudimentary, undifferentiated State.[2]

The Secret Doctrine uses many synonyms for this Principle. Some of them can be found in the following definition by H. P. Blavatsky:

Chaos (Gr.). The Abyss, the "Great Deep". It was personified in Egypt by the Goddess Neith, anterior to all gods . . . Neith is the "Father-mother" of the Stanzas of the Secret Doctrine, the Swabhavat of the Northern Buddhists, the immaculate Mother indeed, the prototype of the latest "Virgin" of all. . . Neith is Swabhavat and also the Vedic Aditi and the Puranic Akasa.[3]

In the section of The Secret Doctrine titled "Chaos—Theos—Kosmos," Blavatsky states that Chaos and Space are synonymous. "Chaos" is called senseless by the ancients because it represented and contained in itself all the Elements in their rudimentary, or undifferentiated State. The Æther of the Greek philosophers was the Akāsa of the Hindus, or the Unseen Space, the supposed veil of the Deity. In the Platonic language, mind and matter were the two primeval and eternal principles of the universe, utterly independent of anything else. The former was the all-vivifying intellectual principle; the latter (chaos) a shapeless liquid principle, without "form or sense." From the union of these two sprung into existence the first deity. According to the phraseology of a Fragment of Hermias, "chaos, from this union with spirit, obtaining sense, produced the first-born light." According to Plato, the "first begotten" of the highest Deity was born of Chaos and Primordial Light (the Central Sun). Even in the exoteric Puranas, also, Brahmā is the Theos, evolving out of Chaos, or the great “Deep,” the waters with the Spirit moving over its face—the future boundless Kosmos—in the first hour of re-awakening.[4]