Difference between revisions of "Charles Johnston" 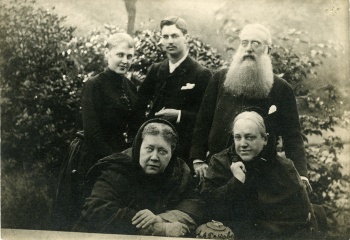 Charles Johnston between wife Vera and H. S. Olcott, with H. P. Blavatsky and her sister Vera in front. Image from TSA Archives. 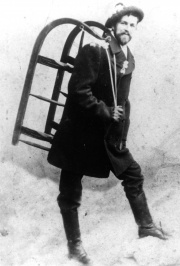 Charles Johnston (February 17, 1867 - October 16, 1931) was a Sanskrit scholar and translator of several Hindu classics, and was married to H. P. Blavatsky's niece. He was a founder of the Dublin Lodge of the Theosophical Society of which William Butler Yeats and A.E. or Æ, as George William Russell was known, were also members. The Johnstons became members of the Theosophical Society in America headed by Ernest Temple Hargrove in New York.

Charles Johnston was born in Ireland, at Ballykilbeg, County Down, on February 17, 1867. His father was a prominent Orangeman, a Member of Parliament for Belfast and leader of the temperance movement. His mother was the daughter of Sir John Hay, a Scottish baronet. Johnston's education was at Derby, England, and later at Dublin University, where he became acquainted with the Irish poets William Butler Yeats and George William Russell, who became known as A.E. or Æ.[1]

As a 17-year-old, in November, 1884, Johnston read A. P. Sinnett's The Occult World. The following year, he and his brother Lewis Audley Marsh Johnston joined the Theosophical Society on June 20, 1885, in the London Lodge.[2] When Madame Blavatsky was attacked by the Society for Psychical Research in the Coulomb affair, Johnston "made a vigorous protest in H.P.B.'s defence"[3] 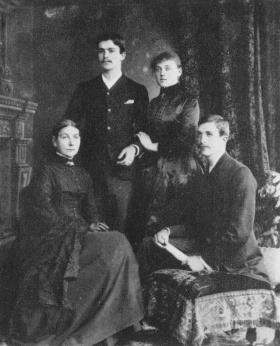 Charles Johnston with wife Vera, mother, and brother Lewis in 1895
He read Esoteric Buddhism, Isis Unveiled, Light on the Path, and Five Years of Theosophy, and in 1887 met Madame Blavatsky in person. During his years at university, he had prepared for the Bengal Civil Service exam, which he passed brilliantly in 1888. In August of that year, he married Vera Vladimirovna de Zhelihovsky, daughter of H. P. Blavatsky's sister Madame Vera Petrovna de Zhelihovsky. The couple had met while she was staying with her aunt in London. The ceremony took place at H.P.B.'s home, 17, Lansdowne Road, London. Col. Olcott, visiting London at the time, represented Vera's mother and the rest of the family at the civil marriage at the registrar's office.[4]

Shortly after the wedding, the Johnstons left for India, arriving in November. He contracted malaria, and became so ill that he was sent home after only two years in the Civil Service position for which he had trained. In order to make a living he turned to writing for periodicals:

He succeeded in connecting himself with some English journals, to which he sent letters on foreign news, and he contributed, to the more serious reviews, articles on ethnological, political and economic questions. Thus employed, for the next six years he and his wife traveled extensively in Europe, visiting her relatives - Madame Blavatsky's nearest kin - in Russia, and staying in different places in England, Holland, Belgium, Germany, Austria, and France. They lived for some time in Salzburg, where Dr. Franz Hartmann then resided, and where Mr. Johnston finally threw off his jungle malaria.[5]

The Johnstons emigrated to the United States, becoming naturalized citizens in 1908. In 1900, they were living in Queens; in 1910 had moved to Manhattan; and in 1920 were in Brooklyn.[6] At the request of the American Theosophical Society leader William Quan Judge,

Mr. Johnston undertook a series of translations from the Sanskrit, which were made a regular feature of the Theosophical Society's literary activity, being published by Mr. Judge as the "Oriental Department papers". It was from the work done in this connection that his first separate volume on the Indians scriptures, From the Upanishads, was culled.[7]

The Theosophical Society was in turmoil in the years just after 1895, when most American lodges chose to follow Mr. Judge into formation of an American society that was dissociated from the international headquarters based in Adyar, India. Judge's death in 1896, and the changes instituted by his successor Katherine Tingley created difficulties that led to the formation of the Theosophical Society that was led by Ernest Temple Hargrove. The Johnstons became mainstays of that group. Charles Johnston served for more than 25 years as Chairman of the Executive Committee. 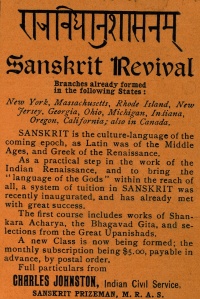 Charles Johnston lectured for the Theosophical Society, travelling across the United States and Europe to visit branches. He also lectured and taught at educational institutions.

He lectured at Cooper Union, and for the New York Board of Education. In 1908, he was Special Lecturer in Political Science at the University of Wisconsin... and he also delivered a number of addresses at Columbia University in New York. At one time he taught at the Russian Seminary.[8]

In his first months in New York, he advertised a Sanskrit course on the inside back cover of Theosophy magazine in September 1897. It mentions classes formed in New York, Massachusetts, Rhode Island, New Jersey, Georgia, Ohio, Michigan, Indiana, Oregon, California, and Canada.[9]

Mr. Johnston was an active member of the Linnaean Society, a group of amateur and professional naturalists in the New York City area who studied natural history and especially ornithology.

According to Henry Bedinger Mitchell, "In 1918-19, he served as Captain in the Military Intelligence Division at Washington."[10]

The 1930 United States Census listed Johnston as a writer and editor, with Encyclopedia Britannica as an employer.

He died on October 16, 1931 of heart disease at St. Luke's Hospital in New York City. A funeral service was held at the Chapel of the Comforter, where Clement Acton Griscom, Jr., Henry Bedinger Mitchell, and Ernest Temple Hargrove were active members. According to the New York Times obituary of October 17, "He was a widower and is survived by two sisters, Mrs. Samuel Brew who is now in British Columbia and another sister in Ireland".[11] He was buried in Woodlawn Cemetery in New York.[12]

Mr. Johnston wrote a great number and variety of articles and books, ranging from scholarly writings on scriptures to popular volumes of humor, travel, and history. The flair and grace of an Irish poet are apparent even in the serious works. See, for example, the introduction to The Song of Life, and the dedication of From the Upanishads, addressed to his Irish friend George William Russell. Ireland: Historic and Picturesque is a charming travelogue, and Kela Bai: An Anglo-Indian Idyll is a tale from India.

Online versions of most of Johnston's writings at Universal Theosophy website.

A succession of articles followed, totaling 16 in all. He contributed 27 articles to Lucifer, beginning with the first volume, December, 1887, and continuing until the Society ceased to concern itself with that publication, which passed into alien hands. Five of these comprised his first translations from the Upanishads, while in addition there were eight half-pages of translated aphorisms. He contributed 15 articles to The Irish Theosophist; 20 to the Path; 8 to Theosophy in the less than two years of its brief existence; 53 translations in the series of Oriental Department Papers, all from the Sanskrit; 53 that have been identified in the The Theosophical Forum (where in the later volumes all articles were unsigned), of which 26 were translations; and 242 articles to the Theosophical Quarterly, from its first to the current volume, not including reviews, answers to questions, or his addresses reported during the sessions of Convention. This is an average of 8 1/2 articles a year for the QUARTERLY, or more than two for each issue. The total number of articles is, therefore, about 434, of which 170 were translations, or an average of almost 10 articles a year for the 44 years he was writing for the Movement.[13][14]

This was all voluntary effort; he was not compensated for this work. The Union Index of Theosophical Periodicals has over 200 articles listed under the name Charles Johnston. Many other articles were published with the initials CJ, but some of those were written by C. Jinarājadāsa of Adyar. The "CJ" articles of Charles Johnston appear in the following journals: Theosophical Quarterly, Theosophy, The Path, The Irish Theosophist, and possibly some in The Theosophist. 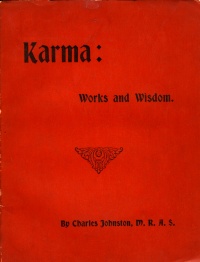 He also published numerous articles for non-Theosophical journals and newspapers, including several articles in The Open Court:

NOTE: In addition to the following titles, Johnston worked on a "Secret Doctrine Outline" that he mentioned in a letter to Dr. J. D. Buck in 1891.[16][17]

Printed editions and e-books are available at this website.