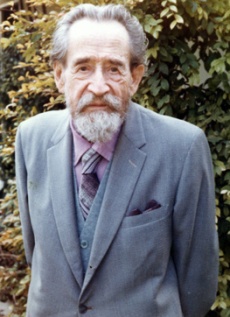 Dane Rudhyar was a French-American composer, writer, artist, and astrologer.

Dane Rudhyar was born in Paris on March 23, 1895 under the name Daniel Chennevière. The maiden name of his mother was Bajaud, but little else is known of his early childhood.

At age twelve, a severe illness and surgery disabled him and he turned to music and intellectual development to compensate for his lack of physical agility. He studied at the Sorbonne, University of Paris (graduating at age 16) and at the Paris Conservatoire. His early ventures into philosophy and association with the artistic community in Paris led to his conviction that all existence is cyclical in character.

His music led him to New York City in 1916, where he composed some of the first polytonal music performed in the United States. He also met Sasaki Roshi, one of the early Japanese Zen teachers in America, who led him in the study of Oriental philosophy and occultism. His interest was further stimulated by his association with Theosophy, which began when he was asked to compose music for a production at the society's headquarters in Los Angeles in 1920. [1]

He stayed on in California. In June 9, 1930 he married Malya Contento, a well-educated Italian immigrant who worked as secretary to independent Theosophist Will Levington Comfort. Comfort, a writer whose novels were produced in films, was acquainted with screenwriter Marc Edmund Jones, and introduced Rudhyar to him. Jones became his mentor in the study of astrology.

Mr. D. Rudhyar, F.T.S., author, musician, and lecturer, visited Headquarters, Feb. 15. He very kindly rendered a few piano numbers for the Adyar Day Program given in the Library that evening.[6]

He was a frequent lecturer in Theosophical Society in America lodges during the 1950s through 1970s in Hollywood, San Francisco, Boston, Washington, and elsewhere. The lecture topics were ranged from astrology to current affairs to religion:

"Does the Wise Man 'Rule His Stars'?"
"The Challenge of Atomic Power to Modern Individuals"
"From Buddha to Christ, Liberation and Incarnation"
"The Meaning of Seven 'Planets' in Virgo"
"New Psychological Trends and Their Application to Astrology"
"Uranus, Neptune, and Pluto; Three Phases on the Path"
"The Value of Zen to the New Generation"
"The Challenge of the Last Quarter of the Twentieth Century"
"The Gift of the Spirit"

Soon after his arrival in the United States, Rudhyar became known as a ultra-modern composer whose ideas about dissonant harmony influenced such composers as Ruth Crawford Seeger, Henry Cowell, and Carl Ruggles.[7] Most of his works were for solo piano or small ensembles. They have frequently been performed in concerts that also featured other 20th-century composers such as Aaron Copeland and Charles Ives.

Rudhyar also wrote and spoke extensively about music, including his own compositions:

Now I am not coming here to interpret my music, to tell you about what it means either symbolically or technically. I am not interested in that because I feel that music is something that must be experienced, that must be lived. It is not even an esthetical product because my approach is not esthetical as much as it is what you might call magical. To me, music is a power of transformation. It has the power to change the vibration of a person — as the Old World knew very well in India, in China, in even the Greece of Plato and Pythagoras — and it is to that approach to music that my life as a musician has been dedicated.

You might even say that music is a psychedelic factor, or at least that it can be so. It can be so because it can change the vibrations of a person, of his aura or his nervous system or whatever is susceptible of changing, of being transformed. It can expand consciousness in different ways...

He described Western music as using notes – abstract entities related to each other in patterns. Eastern music, however, is based on tones, each of which is "the body of a god" related to natural cycles and energies.

In a certain sense, there are no false notes; anything may happen between the tones because they are living entities, and they can relate to one another by subtle glissandos or undulations. It is the quality of the livingness of those tones which counts, whereas in Europe, if you do not strike exactly that note you make a wrong note.[9]

By introducing Oriental scales, composers such as Claude Debussy, Igor Stravinsky, Alexander Scriabin, and, in turn, Rudhyar, began to "decondition" their listeners from Western modes of musical expression. Rudhyar based many of his compositions on series of fifths. Western audiences have found his music to be dissonant, clashing, and eerie. It seems to wander along unknown paths, making unexpected turns, but it always takes listeners into a new consciousness. 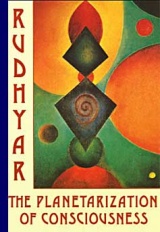 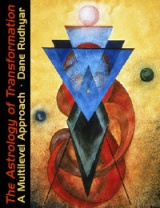 At a point when Rudhyar felt stymied in his musical activities, he took up painting.

If I had been able to pursue my musical activities and if performances of my compositions had been possible, I most likely would not have started to paint. But I soon recognized that behind this new creative activity was a twofold purpose of destiny, though at first I was not aware of it. The first purpose was that I had to experience artistic creativity in two basically different ways, each of which had definite psychological connotations and values in the plenary development of my consciousness through experiences polarized at two different levels of self-revelation: music, which operated for me at the level of time-sequence, that is, in terms of a subjective psychic dimension; and painting, an expression of forms and symbols objectively realized in space. [10].

Rudhyar intended his art to be evocative, but not representational. Painting, unlike music, allowed him "to comtemplate, quietly and at length, a definite entity – an object, a painting – which had emerged out of my psychic depths..." He could use this medium with its symbolic language of color and form to search for truths that had not previously reached his consciousness. Knowing that Wassily Kandinsky used the term "concrete art" for paintings showing the appearance of concreteness, Rudhyar came up with a related term for his own art:

I soon became aware that the proper term to characterize my paintings was transcrete art, because they were not objects having meaning in themselves as much as forms translucent to the light of meaning. The word "transcrete" is made of the Latin roots trans (through) and crescere (to grow). Meaning grows out of the transcrete form as a plant grows out of a seed. The term, diaphanous, could also be used, because the forms in my paintings are (or at least purport to be) revelations of a transcendent quality or archetype of being.[11].

When Rudhyar first began exploring art, he had a significant role in forming the Transcendental Painting Group in New Mexico:

While living in Santa Fe, New Mexico during the mid-1930s Rudhyar formed friendships with Raymond Jonson and other abstract artists exploring the spiritual in art.

On the evening of 7 June 1938, Raymond and Vera Jonson, Lawren and Bess Harris, Emil and Mayiorn Bisttrim, Horace and Florence Pierce, Stuart Walker, Cady Wells, Alfred Morang, Dane Rudhyar and others met to discuss their common interest in abstract and non-objective art. On 10 June 1938, the Transcendental Painting Group was officially formed. Rudhyar was instrumental in formulating the group's theoretic foundations, and, with Raymond Jonson, wrote their manifesto. Later, Rudhyar drew Agnes Pelton into the group. Rudhyar himself began painting, soon creating notable works.[12]

Rather than a focus on event-centered, predictive astrology, Rudhyar preferred "a person-centered type of astrology which essentially deals with the psyche of human beings, with describing character traits, strengths and weaknesses in the nature of a particular person."[13] His 1936 book on the subject, The Astrology of Personality, is considered to be a fundamental work by modern astrologers. In this humanistic astrology, the birth-chart represents the blueprint of the personality from birth to death. It deals with potential and meaning and inner events.

The humanistic astrologer understands a person's life as a developmental process. He or she tries to see how events can be given meaning as phases of this process, actualizing step by step what was potential at birth. Such an approach to astrology deals with a person's life and how it operates as a whole, with events as turning points in life. It deals essentially with dharma, with understanding what we are born for and the steps by means of which we are fulfilling our dharma...

Astrologers operating in such a way... represent the kind of psychologist who has a sense of the sacredness of human life and sees it as a ritual which individual persons perform – and are meant to perform – consciously, and from which they are able to extract a profound meaning.[14]

He believed that astrology could be used as a tool for spiritual growth and self-transformation, referring to this possibility as transpersonal astrology. He was not ready to disparage the value to some people of predictive astrology or scientific approaches to understanding the influence of the heavenly bodies, but considered his to be another valid approach. He did not believe that most of humanity was ready for the occult approach to astrology of H. P. Blavatsky in The Secret Doctrine:

We have to realize that such an [occult] approach does not deal with human beings or nature in physical form, but rather refers to an astral world – a world of forces of which astrologers today know nothing. Times may come when occult knowledge of cosmic forces affecting the realm of the akasa will be available to a number of people, but thinking along such lines as a justification for any of the approaches which are known today in western astrology does not seem to me valuable.[15]

Rudyar's art and philosophy have frequently been the subjects of exhibitions, concerts, and symposia in the United States.

According to The American Theosophist in 1980,

Dane Rudhyar, who has contributed generously to The American Theosophist through the years, was recently awarded an honorary degree of Doctor in Humane Letters from John F. Kennedy University in Orinda, California and an honorary degree of Doctor in Transpersonal Philosophy by the California Institute of Transpersonal Psychology in Menlo Park.[16]

In 1983 the Rudhyar Institute for Transpersonal Activity (RITA) was established as a nonprofit corporation in 1981 to preserve and disseminate the work and essential message of Dane Rudhyar. In 1983 RITA held a weekend conference attended by over 100 people. 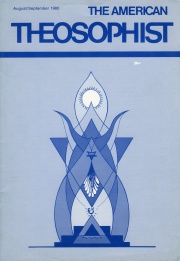 Dane Rudhyar published more than forty books and over 1500 articles, mostly concerning astrology and spirituality. Claude Bragdon wrote, "Rudhyar is a man of profound and penetrating vision, whose writings cast an illumination upon life."[17]

Rudhyar wrote at least 1500 articles for various periodicals such as American Astrologer. He published HAMSA in Brookline, Massachusetts from 1931-1934. It was subtitled: "An Organ of Wholeness Dedicated to the Upholding of the Ideal of Harmonic Cooperation and Synthesis and to the Establishment of a Living Civilization, Animated by the Conscious Realization in Every Individual of the Living God."

The Union Index of Theosophical Periodicals lists 83 articles by or about Dane Rudhyar in nine different Theosophical periodicals.

From 1917 to 1960, Rudhyar wrote seven volumes of poetry, but not all were published.

Books on music and art

The "Seed-Ideas" were "a Series of Seven Essays on the Philosophy of Art."[19] They were published by Hamsa Publications, and printed at the Halcyon Press, and also in collected editions.

Another series called Seed for Greater Living ran from 1955-1962 and printed in Altadena, California. It was a monthly series of booklets published 1955-1962:

The Astrology of Personality is considered to be a classic, fundamental work by modern astrologers. These are most of the other books and pamphlets that Rudhyar wrote: