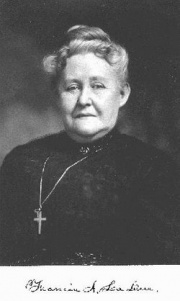 Francia A. La Due was the co-founder with William H. Dower of the Temple of the People in Halcyon, California.

Mrs. La Due became a member of the Theosophical Society and of its Esoteric Section. She and Dr. Dower formed the Temple of the people in Syracuse, New York in 1898. They moved the group to Halcyon, California, establishing the Halcyon Hotel and Sanatorium.

Mrs. La Due, known as "Blue Star," was the leader of the Temple as its first Guardian in Chief until her death in 1922. The Blue Star Memorial Temple Building was named in her honor. It was designed by architect Theodore Eisen of Los Angeles, and constructed in 1923.[3]

The most important writing of Francia La Due was Theogenesis, a third section of the Stanzas of Dzyan. It was written under the guidance of the Master Hillarion. Other notable writings include: