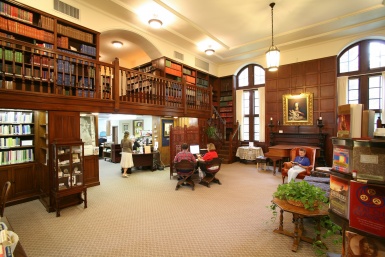 The Henry S. Olcott Memorial Library is the national library of the Theosophical Society in America. It is in the L. W. Rogers Building on the Olcott campus, located in Wheaton, Illinois.

The library catalog lists approximately 25,000 titles, including books, pamphlets, periodicals, and audiovisual materials. Library members throughout the United States can borrow items remotely. The library serves the public through participation in the RAILS (Reaching Across Illinois) Library System and the SWAN library consortium. The specialized collection is much in demand to university and public library patrons through interlibrary loan.

Information about the library is available on its web page. 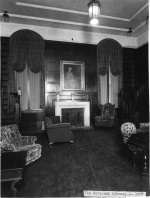 The basis for this library was established by L. W. Rogers while the organization, then called the American Theosophical Society (ATS), had its headquarters in Chicago. In 1923, he made a national appeal for donations of books, writing with his usual eloquence:

A National Theosophical Society without a library is an absurdity. Our literature is the tangible expression of our philosophy and a fortress of spiritual strength. The American Theosophical Society should have the most complete library of theosophical and allied literature to be found in the nation. There are perhaps 200 books at headquarters ... Apparently, no systematic effort has ever been made to found a library that contains all the books that should be represented in such a collection.[1]

Many of the Society's local groups had previously established libraries, and circulation of books had been an important activity of the ATS since 1897. That year, four regional committees established for "propaganda work" were asked to take responsibility for circulating "book-boxes" among their branches (lodges). Each collection of texts was packed in a sturdy wooden box for shipping the lending libraries from one lodge to the next:

Lending Library Box I: Manuals 1-7 — The Ancient Wisdom , Esoteric Buddhism, Birth and Evolution of the Soul, In the Outer Court, Voice of the Silence, Bhagavad Gita, Light on the Path

Lending Library Box II: Key to Theosophy,— Growth of the Soul, Building of the Kosmos, Self and its Sheaths, Plotinus, Orpheus, Four Great Religions, Upanishads, Path of Discipleship, First Steps in Occultism, Three Paths to Union 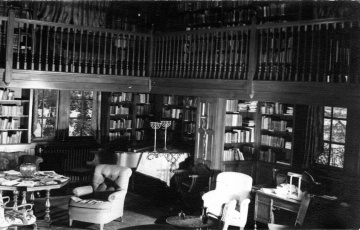 When the Society moved to the Wheaton site in 1927, the south end of the building was expressly designed to house the library collection that was growing rapidly. The Society proposed to honor Mr. Rogers in 1932 by naming it the Rogers Library, but he preferred that it should be called the National Theosophical Library.[3][4]

Library expansion in 1963
The library went through other changes of name, and was eventually named to honor Henry Steel Olcott. For many years the library served as the location for monthly public open houses and teas, at which the guests were entertained by musical performances and speakers.

In 1962-63, the library was expanded with an eighteen-foot extension. The new portion of the building was designed by a husband-wife team of architects, Lillian and Wilbur Leenhouts, who were members of the Milwaukee Theosophical Society. Their design retained the original decorative stone window by having it moved due south into the new curved end of the building. Construction was supervised by engineer George Linton. The extension included shelving, a meeting room, Rare Books Room, and storage room on the upper level adjoining the balcony. On the ground floor, there was space for a librarians' office and ranges of shelving. A basement was excavated under the entire library, providing space for additional storage and processing areas. For many years a portion of the basement served as a shipping room.

In 1968 Mrs. Seetha Neelakantan, formerly of the Adyar Library and Research Centre, began work at the Olcott Library to expand the collection related to Eastern religions.[5] She supervised conversion of the shelf arrangement of that section to correspond to the modified Dewey Decimal System arrangement of Eastern religions books in Adyar.

As new media became available over the years, the library collected appropriate items, including the output of the Audiovisual Department. Films, slides, audiocassettes, videocassettes, compact discs (CDs), and digital video discs (DVDs) have each, in turn, taken their places in the collection. 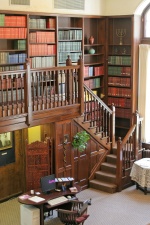 The circulating book collections focus on Theosophy, the Theosophical Movement, world religions, philosophy, science, art, healing, and other topics of interest to members. The library has reference works, fiction, biographies, and a children's section. The audiovisual collection includes CDs, DVDs, and audio and video cassettes. Many of the media were recorded by the Audiovisual Department of the Theosophical Society in America, but there are also fine commercially produced works and some from the Great Courses series.

The Rare Books Room has the volumes that Boris de Zirkoff used to edit the H. P. Blavatsky Collected Writings, and also the library of Mary K. Neff, along with many old and rare works.

From its earliest days, the library has been a center of activity in the TSA headquarters. For many years, monthly lectures were offered to the public with tea and entertainment. The staff have used the reading room for Christmas and Halloween parties. It has been the site for many weddings, and some memorial services, including that of Curuppumullage Jinarājadāsa in 1953. During summer conventions at the Olcott campus, the library has been a location for discussion groups and meetings. Wheaton lodges, including the current Wheaton Olcott Lodge, have used the library as a comfortable base for meetings. 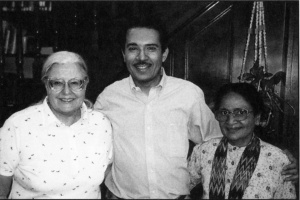 A library union catalog was first established in June, 2000. The Sellon family and the Kern Foundation provided grants to fund a new automated library system that supported a Web-based catalog shared with the Krotona Library and the Emily Sellon Memorial Library. Librarians Elisabeth Trumpler of Olcott, Lakshmi Narayanaswami of the Krotona Institute and Michael Gomes of New York spent a week in training sessions before the system was implemented.

Under the leadership of Marina Maestas, the library became a participant in the RAILS (Reaching Across Illinois) Library System and in the MAGIC (Multitype Automation Group in Cooperation) consortium of public, school, and other libraries. In 2017, the MAGIC libraries all joined the larger SWAN consortium (System Wide Automated Network) of 96 libraries in northern Illinois. Through SWAN, the library shares catalog and loan services, with a customized catalog interface that displays a moving stream of new titles and links to many other features of the library web page. After joining SWAN, the circulation of Theosophical Society books to the general public quadrupled.

The Olcott Library engages actively in interlibrary loans, and its holdings can be viewed through OCLC Worldcat. The Krotona Library and the Emily Sellon Memorial Library are still tightly connected to the Olcott Library through this system.

The library was for many years affiliated with the American Theological Libraries Association, and still works closely with the University of Chicago's Regenstein Library, which has a strong collection of Theosophical works.

During the library's long affiliation with the American Theological Libraries Association, the two organizations collaborated on several projects to microfilm periodicals. An example is The Vahan. A complete run of the journal was compiled with help from Alexandria West Library, and then microfilmed at the ATLA facilities in Chicago. ATLA has been digitizing all its films, but access is allowed only by subscription. 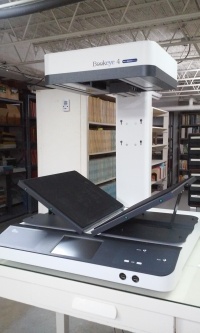 Library and Archives Departments worked together in 2014 to put together a proposal to purchase a BookEye 4 scanner for the digitization of books and periodicals. The model selected is a tabletop scanner (rather than a big booth or heavy-duty production scanner) that can produce TIFF, JPEG, or PDF output up to 17x24 (or A2) in size. It can scan a book held gently in a cradle or flat, and has software to remove fingermarks and curvature. Searchable PDF files created with this technology are stored in the Internet Archive, cataloged as digital objects in the library catalog, and are also linked from the Theosophy Wiki. Funding was put together from a bequest by Don Campbell and a grant from The Kern Foundation.

These are some of the materials that have been digitized using this scanner:

Other titles can be found at the Theosophical Society in America's Internet Archive account.

During 2015-2017, the library negotiated with the academic content provider ProQuest to add the TSA's journals to the Religious Magazine Archive. In a massive effort, library staff packed up complete runs of The Theosophic Messenger, The Messenger, The Theosophical Messenger, The American Theosophist, The Quest, and Quest and sent them to the vendor for digitization. The earliest journal, Mercury, was scanned in-house using the BookEye 4 scanner, because the issues were considered too fragile and rare to ship. By October, 2017, most of the issues had been loaded into the ProQuest database, where they are available at academic libraries around the world. Individuals can subscribe to the database, although it is expensive. The Olcott Library staff also has access, and can print or download articles for members.

Members frequently donate books, which are very welcome. Donations are carefully evaluated. Some are added to the circulating collection; some duplicates are stored for future use; and others are sold to raise money that is used for collection development. The library always has a few volumes for sale in the reading room, and others are sold during the Summer National Convention in July and at TheosoFest in September. Many volumes are listed in the library's Amazon store, and selected items go into an AbeBooks store. All donations are tax-deductible.

Many resources are available in the Website for the library. A Browse by Subject feature and Reading Lists provide help to patrons who are looking for materials about a specific topic. There are also links to Theosophical periodicals and resources that are available online.