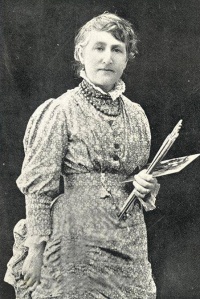 Mme. de Steiger was admitted to the Theosophical Society in Birmingham, England on April 12, 1879, making her one of the earliest members of the Society. She resigned on June 28, 1905.[1]

Isabella was certainly the most prominent Golden Dawn artist. She exhibited a lot, the National Art Gallery at the Victoria and Albert Museum holds records of her showing pictures on 60 to 70 occasions. Her works made frequent appearance in the big public exhibitions which selected entries on merit, such as the Manchester Art Gallery, the Liverpool Art Gallery, the Grovesnor Gallery in London and, most prestigious of all, the Royal Academy. Her work also featured in exhibitions by the Royal Society of British Artists, the Royal Hibernian Society, Royal Scottish Society, the Royal Institute of Oil Painters, the Royal Society of Birmingham Artists and the Society of Woman Artists. Her works appeared alongside those of the major artists of the day and sold for substantial prices. She was preparing for a one woman show, one of the very first to be accorded to a female artist, when a warehouse fire destroyed much of her output, seriously hindering her recognition as an artist and making her work very scarce now. A number of her pictures were reproduced in monochrome in the Unknown World, the journal edited by A.E. Waite.<ref"Isabella de Steiger, Castles in the Air" at Caduceus Books website.</ref>