Difference between revisions of "Klesha" 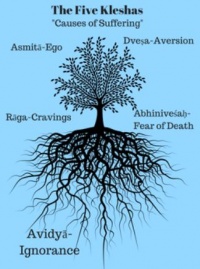 The five kleshas are:

- Ignorance (āvidyā): Taking the non-eternal, impure, evil and not-self to be eternal, pure, good and self respectively

- Egoism (asmitā): The identification of the perceiving consciousness with the instrument of perception (mind).

- Attraction (rāga): That which follows after pleasure.

- Repulsion (dveṣa): That which follows after pain.

- Attachment to life (abhiniveśāḥ): The strong desire for life which dominates even the learned.

In Yoga sutra 2.12, Patanjali explains that the repository of karma is rooted in the kleshas, that is, they are the underlying cause of the karma we generate by our thoughts, desires and actions. He adds (2.13) that as long as this root exists, there will be repeated incarnations of different types, lengths and experiences. Liberation from the wheel of reincarnation comes with the destruction of the kleshas.

The kleshas can be in four states or conditions:

(1) Expanded; being fully operative in an unrestricted way.

(2) Alternating; between periods of active expression and inactivity due to the action of other tendencies.

(3) Attenuated; with a weak or subdued expression.

(4) Dormant or latent; in a condition that is difficult to bring back into activity.

The more the kleshas are attenuated the greater becomes the capacity for samadhi. When the kleshas have been reduced to the vanishing point there is natural samadhi (sahaja-samadhi), which is at the threshold of liberation.

Patanjali prescribes general principles for first attenuating the kleshas, and finally destroying them. Yoga sutra 2.2 he describes the discipline of kriya-yoga (austerity, self-study and surrender to Ishvara) as a way to attenuate the kleshas.

Yoga sutra 2.10 describes the method to destroy the attenuated klesas, which is by reversing the process by which the kleshas are produced. The next sutra 2.11 explains that the activity of the kleshas is overcome by meditation (dhyana).