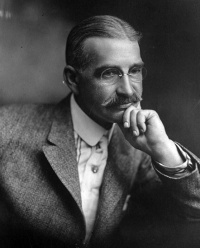 The Aberdeen Saturday Pioneer was published by L. Frank Baum from January 25, 1890 - March 21, 1891.[1] In the first issue of the paper under his editorship (before he joined the Society), he wrote about Theosophy saying:

Amongst the various sects so numerous in America today who find their fundamental basis in occultism, the Theosophist[s] stand pre-eminent both in intelligence and point of numbers.[2]