The drawings from Irving Kane Pond's proposal were published in The Messenger, and the members were excited to see them. The original art works were created with pen and pastels. Along with blueprints, correspondence, and specifications, they have been preserved using grant funding from the Illinois State Historical Records Advisory Board by the Archives Department of the Henry S. Olcott Memorial Library.

Construction began in 1926, and the cornerstone was laid on August 29th in a Co-Masonic ceremony led by Annie Besant. The event was heavily covered by the Chicago Tribune and other newspapers, and people came by the hundreds on the interurban trains from Chicago to be present. In the photograph at the right, Annie Besant and A. P. Warrington are in front; L. W. Rogers appears between them; and architect Irving Kane Pond is third from the right (older man in dark suit). Jiddu Krishnamurti accompanied Annie Besant to Wheaton, but he does not appear in photographs of the ceremony. The architect mentioned the event in his autobiography. The cornerstone was filled with copies of major Theosophical texts such as The Secret Doctrine. Also enclosed was a parchment signed by L. W. Rogers, vice president C. T. Holland, and the directors of the Board: Maude N. Couch, M. B. Hudson, E. C. Boxell, and H. Kay Campbell. 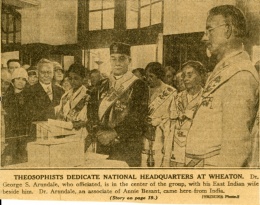 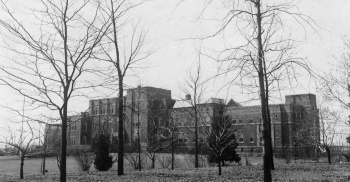