In 1925 the American Theosophical Society, now known as the Theosophical Society in America, purchased land in Wheaton, Illinois for a new headquarters campus. The Board of Directors approached architect Claude Bragdon, a prominent member of the Society, to design a building to serve as headquarters. Bragdon was then closing down his architectural practice to begin a career in theatrical design, and recommended a Chicago architect, Irving Kane Pond, of Pond & Pond, Martin & Lloyd, to take on the project. The architectural firm submitted two designs, and the Board could not decide between them, so President L. W. Rogers sent the drawings to Bragdon for review. Bragdon wired back that he preferred the asymmetrical design by Irving Pond over a symmetrical rendering by one of his partners.

Construction began in 1926, and the cornerstone was laid on August 29th in a Co-Masonic ceremony led by Annie Besant. The event was heavily covered by the Chicago Tribune and other newspapers, and people came by the hundreds on the interurban trains from Chicago to be present. In the photograph to the right, Annie Besant and A. P. Warrington are in front; L. W. Rogers appears between them; and architect Irving Kane Pond is third from the right (older man in dark suit). 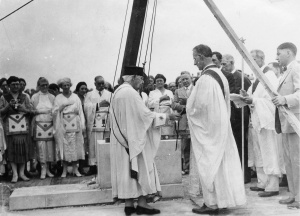 A dedication ceremony was conducted by the international president of the Theosophical Society, George S. Arundale in August 1927, and in September the staff moved the offices from Chicago.

In 1932, the headquarters estate was named "Olcott" in honor of President-Founder Henry Steel Olcott.

The architecture of Irving Kane Pond is difficult to classify, but the Rogers Building is considered to fall into the Collegiate Gothic style, with interiors influenced by the Arts and Crafts Movement. The