Difference between revisions of "Louise A. Off"

Louise A Off (1864-1895) was a Theosophist and artist in California. She is best known for becoming the editor of The New Californian, the journal of the early American Section of the Theosophical Society. At one time, she was thought to use the pseudonym "Nizida," but that connection is now discredited.

Louise A. Off was born in Newville, Wisconsin in 1864, as the daughter of a clergyman born in Germany. After spending her childhood in Springfield, Iowa, she settled in Los Angeles about 1882. 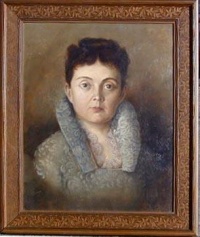 Example of work by Miss Off

According to a compendium of artists' biographies, "She taught painting to small groups while active with women’s clubs and the social scene until her death there in 1895. Her works are rare due to her short life span."[1]

Miss Off died of consumption at 31 years of age, on January 6, 1895, with her remains cremated on the 7th.[2] She was said to be "a prominent member of the Society in California, and one of the pioneers of the movement on the Pacific Coast."[3]

Miss Off was a very early active member of the Theosophical movement in the United States, joining in 1886. She was secretary of one of the very first American lodges – the Los Angeles Theosophical Society. The group was chartered in 1885 as the seventh lodge in the United States, a year before the American Section formed. Mrs. Elizabeth A. Kingsbury was President.[4] Miss Off "conducted in her home well-attended weekly meetings for the discussion of Theosophy."[5]

Here are some of her other Theosophical Society activities:

In July 1892 she became editor of The New Californian as successor to Dr. Jerome Anderson. In addition to her work in this journal, she wrote articles for the Los Angeles Times, Pages from a Young Man's Journal, The Platonist, and Theosophical periodicals including Lucifer, Theosophical Siftings, and The Theosophist. These are some of the titles:

Miss Off also participated in the Hermetic Brotherhood of Luxor and in the American Psychical Society. She was "active in the Nationalist movement of the 1890s inspired by Edward Bellamy's novel Looking Backward.[11]