Mabel was introduced to Theosophy in 1881, when their neighbor Isabelle de Steiger loaned Robert a copy of H. P. Blavatsky's first book Isis Unveiled. Mabel eventually became a regular visitor of the Sinnetts on Tuesday afternoons, and joined the London Lodge on April 19, 1884.

Previous to her Theosophical connections she had started writing the book The Idyll of the White Lotus. N. D. Khandalavala recounted the writing of this book as follows:

When I met her, she had just completed the Idyll of the White Lotus, which, as she stated to Colonel Olcott, had been dictated to her by some "mysterious person." Guided by her description, we both recognized an old friend of ours, a Greek, and no Mahatma, though an Adept; further developments proving we were right.[6]

Mabel stated that during the writing of the book, "she had been absolutely taken from her body in order that her hand and pen might be used by another intelligence."[7] N. D. Khandalavala wrote other details of the process:

The lady [M.C.] was psychic, and she said that she used to be taken day after day for several days in her astral body to a Hall, on the walls of which she used to see and read some lines written in golden letters, which she remembered and, when she woke up, put down on paper. These lines, when all put together, formed the remarkable little book called Light on the Path written down by M. C.[8]

Before my return to India in 1884, I saw Mabel Collins barely three or four times. She then showed me the first page or two of Light on the Path, wherein I recognized some phrases which were familiar to me. Therefore I the more readily accepted the description of the manner in which they had been given to her. She herself certainly believed that this book was dictated to her by 'some one' whose appearance she described.[9] 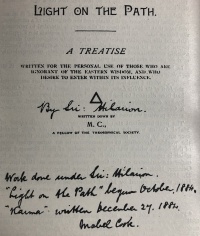 According to Blavatsky, the inspirer was Master Hillarion:

[Mabel] saw before her, time after time, the astral figure of a dark man (a Greek who belongs to the Brotherhood of our Masters), who urged her to write under his diction. It was Hillarion, whom Olcott knows well. The results were Light on the Path and others.[10]

Four years following the publication of Light on the Path, after Mabel left the Theosophical Society, she changed her version about the authorship of the book. On May 11, 1889, Prof. Elliott Coues sought to discredit Madame Blavatsky by means of an article appearing in the The Religio-Philosophical Journal. According to him, after the publication of Light on the Path in 1885, he had inquired Mabel about the authorship of this work. The answer he received was:

Blavatsky quickly and vigorously disputed Coues, in a letter published in the periodical Light on June 1, 1889.[11] She stated, among other things, that she had seen Mabel only a few times in London before the publication of the book, soon after which she departed to India in November, 1884. Therefore, she was not in London when Prof. Coues wrote to Mabel in 1885 inquiring about the authorship of the book, and could not have dictated any answer to her.[12]

The original claim about the authorship of the book by Master Hilarion is confirmed by a dedication to one of the copies of Light on the Path in which she wrote:

In a 1922 article in the London Occult Review, she acknowledges that "by the help of a Master, and for an object which will be of service to the world, it is possible for the spirit of a disciple on earth to visit this higher state we call ethereal and enter the Hall of Learning, in full waking consciousness. It was in that way that I obtained the stanzas of Light on the Path."[13] 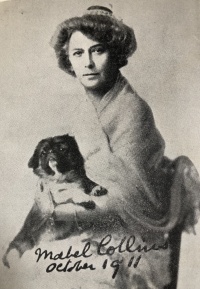 Mabel Collins was also known for her work for animal rights and her campaign against vivisection. She founded the Incorporated Parliamentary Association for the Abolition of Vivisection, which was registered as a corporation on February 22, 1907.[14]

Mabel Collins wrote at least 46 books. These are the English-language titles according to the [15], listed here by publication date:

Idyll of the White Lotus was adapted into a play by Maud Hoffman Sensa, a Mystery Play in Three Acts.[16]