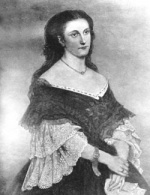 Mary Gebhard (née L’Estrangge) (1832 - December 15, 1892) was the wife of Consul Gustav Gebhard, and an active member of the Theosophical Society. The first Theosophical Lodge in Germany, the Germania Theosophical Society, was formed and met in her house, and H. P. Blavatsky stayed with her on two occasions. She received a few letters from the Masters of Wisdom and saw the astral form of Master M.

She met Gustav Gebhard in New York, on his first journey to America, and married him on September 4, 1852, the ceremony being performed according to both the Catholic and the Protestant rites. The newly-married couple settled in Elberfeld, Germany. They eventually formed a family of seven children.

Mary Gebhard was not too happy living in a small town. Owing to the many business trips of her husband, she was left very much to herself. She had an inborn inclination towards philosophical and occult subjects, and studied Hebrew with a clergyman, to become fitted for independent research in the Kabbalah. She made the acquaintance of the Abbé Alphonse Louis Constant, who, under his pseudonym of Eliphas Levi, wrote well-known occult works, and remained his pupil until his death in 1875. She visited him several times in Paris, and he visited the Gebhards twice in Elberfeld.[2]

After the death of Éliphas Lévi, Mary sought other occult connections. She heard of the Theosophical Society, and after an exchange of letters with Col. Olcott, became a member of the Society.

On the 7th of April last, being, at a meeting of the Theosophical Society at Mr. Finch’s rooms, Lincoln’s Inn, I had a vision, in which I saw the Mahatma M. At the moment I was listening attentively to Colonel Olcott’s opening speech to the Society. I saw standing on my right side, a little in front, a very tall, majestic-looking person, whom I immediately recognised to be the Mahatma, from a picture I had seen of him in Mr. Sinnett’s possession. He was not clad in white, but it seemed to me to be some dark material with coloured stripes, which was wound round his form. The vision lasted only a few seconds. As far as I could learn, the only persons besides myself who had seen the Mahatma were Colonel Olcott, Mr. Mohini, and, of course, Madame Blavatsky.[3]

ON Saturday — April the 10th, Walter Gebhard was found dead in his bed, having shot himself without any reason and no cause, his things packed up and ready to start home. The fiends of rage, of vindictiveness, malice, and hatred let loose by you in their home have fastened on the poor boy you boasted to influence so forcibly, and have done their work. It is not his twin brother who committed suicide five years ago who influenced him. Herman's astral form is in Deva Chan, sleeping to the day his natural death would have summoned him. It is a host of the Pisachas of murder and post mortem criminal impulses who, copying from the record in the astral light around him of his brother's kind of death, led him to shoot himself during a state of somnambulic unconsciousness and irresponsibility. He is the first victim of your wicked father's son, and your grandmother's worthy grand-son.[4]