Difference between revisions of "Morya"

Morya's initial from
Mahatma Letter No. 36

Morya (frequently referred to simply as M.) is H. P. Blavatsky's Master and one of the Mahatmas that inspired the founding of the Theosophical Society. He engaged in a correspondence with two English Theosophists living in India, A. P. Sinnett and A. O. Hume, when Mahatma K.H. went into retreat for a few months. This correspondence was published in the book The Mahatma Letters to A. P. Sinnett. He was H. P. Blavatsky's Master.

Charles Johnston interviewed H. P. Blavatsky and asked her about the Masters. In the following excerpt Johnston describes his impression about Master M.'s handwriting as opposed to that of Master K.H., and then Mme. Blavatsky gives some information about her Master:

"The red [handwriting] . . . is fierce, impetuous, dominant, strong; it comes in volcanic outbursts, while the other [Master K.H.'s] is like Niagara Falls. One is fire, and the other is the ocean. They are wholly different, and both quite unlike yours. But the [red handwriting] has more resemblance to yours. . . ."


"This is my Master," she said, "whom we call Mahatma Morya. I have his picture here." And she showed me a small panel in oils. If ever I saw genuine awe and reverence in a human face, it was in hers, when she spoke of her Master. He was a Rajput by birth, she said, one of the old warrior race of the Indian desert, the finest and handsomest nation in the world. Her Master was a giant, six feet eight, and splendidly built; a superb type of manly beauty. Even in the picture, there is a marvellous power and fascination; the force, the fierceness even, of the face; the dark, glowing eyes, which stare you out of countenance; the clear-cut features of bronze, the raven hair and beard—all spoke of a tremendous individuality, a very Zeus in the prime of manhood and strength. I asked her something about his age. She answered:


"My dear, I cannot tell you exactly, for I do not know. But this I will tell you. I met him first when I was twenty,—in 1851. He was in the very prime of manhood then. I am an old woman now, but he has not aged a day. He is still in the prime of manhood. That is all I can say. You may draw your own conclusions."[1] 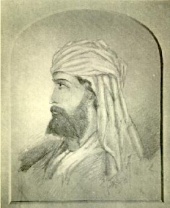 Portrait produced by Monsieur Harrisse at the "Lamasery" in New York

A Rajput (from Sanskrit raja-putra, “son of a king”) is a member of one of the patrilineal clans of western, central, northern India and some parts of Pakistan. They claim to be descendants of ruling Hindu warrior classes of North India. The Mahatma's clan was confirmed by him in a letter sent to A. P. Sinnett when he said: "My Rajput blood will never permit me to see a woman hurt in her feelings..."[2]

Master K.H., in another letter to Mr. Sinnett, describes Morya as follows:

You . . . will hardly if ever be able to appreciate such characters as Morya's: a man as stern for himself, as severe for his own shortcomings, as he is indulgent for the defects of other people, not in words but in the innermost feelings of his heart; for, while ever ready to tell you to your face anything he may think of you, he yet was ever a stauncher friend to you than myself, who may often hesitate to hurt anyone's feelings, even in speaking the strictest truth.[3]

Again, according to Master K.H., Morya "is better and more powerful than I"[4]

Now Morya lives generally with Koot-Hoomi who has his house in the direction of the Kara Korum Mountains, beyond Ladak, which is in Little Tibet and belongs now to Kashmire. It is a large wooden building in the Chinese fashion pagoda-like, between a lake and a beautiful mountain.[5]

H. P. Blavatsky was a disciple of Master M. The Countess Constance Wachtmeister wrote in her Reminiscenses of H.P. Blavatsky how she met him:

During her childhood [Madame Blavatsky] had often seen near her an Astral form, that always seemed to come in any moment of danger, and save her just at the critical point. HPB had learnt to look upon this Astral form as a guardian angel, and felt that she was under His care and guidance. In London, in 1851, she was one day out walking when, to her astonishment, she saw a tall Hindu in the street with some Indian princes. She immediately recognized him as the same person that she had seen in the Astral. Her first impulse was to rush forward to speak to him, but he made her a sign not to move, and she stood as if spellbound while he passed on. The next day she went into Hyde Park for a stroll, that she might be alone and free to think over her extraordinary adventure. Looking up, she saw the same form approaching her, and then her Master told her that he had come to London with the Indian princes on an important mission, and he was desirous of meeting her personally, as he required her cooperation in a work which he was about to undertake. He then told her how the Theosophical Society was to be formed, and that he wished her to be the founder. He gave her a slight sketch of all the troubles she would have to undergo, and also told her that she would have to spend three years in Tibet to prepare her for the important task. HPB decided to accept the offer made to her and shortly afterwards left London for India.[6]

It is possible that Countess Wachtmeister confused the date with H. P. Blavatsky’s previous visit with her father to London in the '40s. Mme. Blavatsky wrote to Mr. Sinnett: "I was in London and France with Father in '44 not 1851." Though in this letter she explains that she does not remember well what happened in years past, she told Mr. Sinnett how she met the Master:

I saw Master in my visions ever since my childhood. In the year of the first Nepaul Embassy (when?) saw and recognised him. Saw him twice. Once he came out of the crowd, then He ordered me to meet Him in Hyde Park. I cannot, I must not speak of this. I would not publish it for the world.[7]

Blavatsky on the name "Morya"

The name Morya is the same as that of the Maurya clan, which ruled India from 322-185 BCE. The invincible Chandragupta Maurya, founder of the Maurya Empire, united the Indian subcontinent, while his grandson, Ashoka the Great, adopted Buddhism and sent missions to other parts of Asia as well as the Mediterranean world. In the Mahaparinibbana Sutta, an early Buddhist text that records the end of Gautama Buddha’s life, the “Moriyas of Pipphalavana” are said to have “built a great stupa for the embers” that remained from the cremation.[8] This passage suggests that there was already a connection between the Maurya clan and Buddhism. Blavatsky claims that long after the fall of the Mauryan Empire, the Mauryas (or Moryas) continued to have a deep connection with Buddhism. In 436 CE an Arhat (Buddhist saint) named Kasyapa, who belonged to the Morya clan, left an Indian convent in Panch-Kukkutarama with the fifth of seven golden statues of the Buddha, which he carried to a lake in Bod-yul (Tibet), thereby fulfilling an ancient prophecy. Seven years later the first Buddhist monastery was established on that spot, although the conversion of the country did not begin in earnest till the 7th century. Most of the abbots of that monastery “were the descendants of the dynasty of the Moryas, there being up to this day three of the members of this once royal family living in India.”[9]

H. P. Blavatsky explicitly affirms a link between the Shakya clan, to which Gautama Buddha belonged, and the Moriya clan, stating that the former founded a town called Moriya-Nagara. She adds that the Rajput tribe of Mori owes its name to being “composed of the descendants of the first sovereign of Moriya, Nagari-Môrya,” and that the Moryas are Kshatriyas, unlike Master Koot Hoomi and the Rishi Koothumi who are “Northern Brahmans.”[10] The name Moriya probably derives from mayura or mora, which means peacock.[11] The peacock image connects this warrior clan with Karttikeya, the Hindu war god, whose vehicle is a peacock, and possibly with the Buddhist “Peacock Lord,” a Wisdom King (Kujaku-myoo in Japan, the female Mahamayuri in India).

In a letter from Henry S. Olcott to Allan O. Hume about the Mahatmas, printed by Mr. Hume in his "Hints on Esoteric Theosophy":

One evening, at New York, after bidding H. P. B. good night, I sat in my bed-room, finishing a cigar and thinking. Suddenly there stood my Chohan beside me. The door had made no noise in opening, if it had been opened, but at any rate there he was. He sat down and conversed with me in subdued tones for some time, and as he seemed in an excellent humour towards me, I asked him a favour. I said I wanted some tangible proof that he had actually been there, and that I had not been seeing a mere illusion or maya conjured up by H. P. B. He laughed, unwound the embroidered Indian cotton fehta he wore on his head, flung it to me, and --- was gone. That cloth I still possess, and it bears in one corner the initials ( ___ ) of my Chohan in thread-work.[12]

In his book The Masters and the Path C. W. Leadbeater describes Master M as follows:

He is a Rajput King by birth, and has a dark beard divided into two parts, dark, almost black, hair falling to His shoulders, and dark and piercing eyes, full of power. He is six feet six inches in height, and bears Himself like a soldier, speaking in short terse sentences as if He were accustomed to being instantly obeyed. In His presence there is a sense of overwhelming power and strength, and He has an imperial dignity that compels the deepest reverence.[13]