Narada (Sanskrit: नारद, Nārada) is a Vedic rishi (sage), referred to as the king of all rishis. He was gifted with the boon of knowledge of past, present and future. From time to time, he is said to descend to earth and create conflicts between people to set karmic matters right. 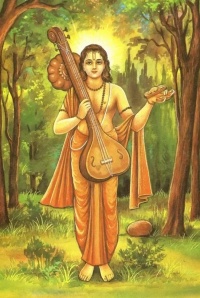 H. P. Blavatsky wrote about him as follows:

Of all the incomprehensible characters in the Mahabhârata and the Purânas, Narada, the son of Brahmâ . . . is the most mysterious. He is referred to by the honourable title of Deva Rishi (divine Rishi, more than a demi-god) by Parasâra, and yet he is cursed by Daksha and even by Brahmâ. . . . Narada is here, there, and everywhere; and yet, none of the Purânas gives the true characteristics of this great enemy of physical procreation. Whatever those characteristics may be in Hindu Esotericism, Narada—who is called in Cis-Himalayan Occultism Pesh-Hun, the “Messenger,” or the Greek Angelos—is the sole confidant and the executor of the universal decrees of Karma and Adi-Budh: a kind of active and ever incarnating logos, who leads and guides human affairs from the beginning to the end of the Kalpa.
“Pesh-Hun” is a general not a special Hindu possession. He is the mysterious guiding intelligent power, which gives the impulse to, and regulates the impetus of cycles, Kalpas and universal events. He is Karma’s visible adjuster on a general scale; the inspirer and the leader of the greatest heroes of this Manvantara.[1]

Annie Besant explained that, "from time to time, appeared the mysterious Narada, Son of will and yoga, he who had learned the secret of appearing upon earth during incalculable ages, by stepping from one body to another, arbiter of the destiny of nations, guider of the whirling wheels of change, the sparks whereof are wars and natural convulsions."[2] She elaborated as follows:

Look, for instance, at the great Sage Narada. We find him stirring up war, when two nations have reached a point where the higher good of each can only be gained by the struggles of war, and by the conquest of one by the other. Bodies are killed, and it is the best help to the men thus slain that their bodies should be struck away, and that, in new bodies, they may have greater possibility of growth. Gods bring about the battle in which thousands of men are slain. It would be wicked for us to imitate them, because to stir up war for the sake of conquest or gain, or ambition, or for some object where personality comes in, is sinful. But in the case of Narada it is not so, because Devarishis such as he is are helping the world along the path of evolution by striking away the obstacles. You will understand something of the wonders and mysteries of the universe, when you know that things that seem evil from the side of form are good from the side of life; all that happens is working for the best. “There is a divinity that shapes our ends, rough-hew them as we may.” Religion is right when it says that the Gods rule over the world and guide nations, and lead and even scourge them into the right path when they go astray."[3]

What are the functions of Narada? Typically those of carrying out karmic destiny. There you have a key to all his activities. What the Lipikas have written down, Narada as an individual agent or as an individuality, as an Archangel, sees are carried out. He is the agent of karmic destiny. The consequence is, just because destiny to us humans is often so unpleasant due to our own faults and failings in the past, Narada has been given very uncomplimentary titles by those who have seen his work in the world and in the world of men and who do not like it. When they do like it, when it is something that humans like, he is given very complimentary titles: the Benefactor, the Kindly Helper, the Warrior for Mankind, the bringer about of all the good things in destiny. But when as an impartial, impersonal agent of karmic destiny he brings about trouble on the human race, then he is given very uncomplimentary names by men, as for instance he is called Kali-Kara, the Strife-Producer, because in the course of human destiny it is his work to bring about war and peace, to bring about war and to bring about peace.[4]