Difference between revisions of "Olcott (campus)" 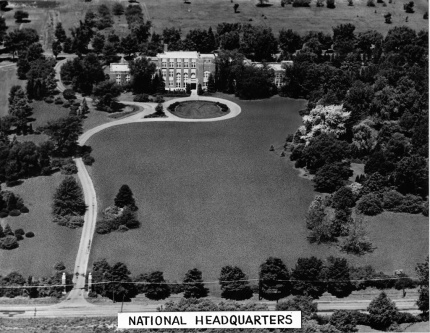 Aerial view of campus in 1940s. Image from TSA Archives.

Logo of the Olcott Arboretum

Olcott is the headquarters estate of the Theosophical Society in America, located in Wheaton, Illinois. It comprises about 41 acres (16.6 hectares) of land, with offices and library in the L. W. Rogers Building; the Quest Bookshop and the Theosophical Publishing House in the Joy Mills Building; warehouse, garages, and maintenance buildings; and houses occupied by employees.

The park-like grounds are open to the public from dawn to dusk throughout the year. The campus and its buildings are entirely vegetarian, and the staff practices recycling and composting. In 2019 the campus was designated as Olcott Arboretum by ArbNet, an international body of accreditation for arboreta.

These are video tours of the campus and its history:

Purchase of the land

President L. W. Rogers of the American Theosophical Society, now known as the Theosophical Society in America, initiated a search for a permanent headquarters location. The Society had outgrown its Chicago building at 826 Oakdale Avenue. Mr. Rogers sought a new site that was centrally located - that is, within 500 miles of Chicago; near excellent rail transportation; with inexpensive land available in an attractive rural setting. The search was well publicized. Society members wrote to propose locations, and local officials from across the Midwest offered sites. National Secretary Kay Campbell found land in Wheaton that fulfilled all the requirements, and early in 1925 the Society purchased almost 10 acres (4 hectares) of farmland on North Main Street. The original acreage is shown in the aerial photograph above.

No mortgage was ever necessary to purchase land or finance construction. L. W. Rogers and his successor Sidney A. Cook worked out a plan for members to lend money in exchange for interest-bearing bonds, even through the difficult years of the Great Depression. Many of the paid-off bonds were burned in a joyful ceremony at the 1938 summer convention, and the final debt was eliminated in 1944.[1]

Over the years, many Society members bought parcels of land adjoining the estate, and donated them to expand the headquarters estate to its current dimensions.

When purchased, the land was plowed a farm field. The first priority of members was to establish a grove of trees, so on May 8, 1925, Kay Campbell and several others planted the first sapling, a silver linden. Within a few weeks, dozens of trees were planted. A small cottage was built for the caretaker, who started to work on a water feature to take advantage of the stream of water that ran across the middle of the acreage. Members nationwide donated money and plants to create a park-like atmosphere at their new headquarters, and followed the progress each month in The Messenger and The Theosophical Messenger.

Gradually the estate took on a park-like atmosphere. Several groves and gardens were established from donations of specific members, such as the Aubrey Garden named after the deceased young son of Sidney A. Cook. Members donated money for recreational facilities to be used by the staff, and by visitors during the summer sessions. A tennis court was constructed, along with three smaller courts for quoit-tennis (also called deck tennis). The water feature was shaped with blocks of stone, and included several pools for water lilies. Unfortunately, the water table dropped sometime in the later 1930s or early 1940s, when Geneva Road (the north boundary of the property) was paved, and water no longer flowed to fill the ponds.

The L. W. Rogers Building was constructed in 1926-1927. From that time it has housed the Society's administrative offices, national library, and public programming. 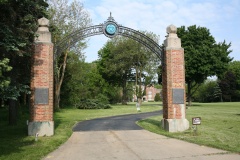 At the summer convention in 1940, a new structure was unveiled for members in a Co-Masonic dedication ceremony. An archway was installed at the Main Street entrance to the campus. It was designed by Theosophist Claude Bragdon, an architect, artist, writer, and editor from New York. The cost of the project was underwritten anonymously by a member from Portland, Oregon, later acknowledged to be John H. Mason.

Two stone and brick support columns are topped by carved Platonic solids - a dodecahedron and an icosahedron. Between them is a wrought iron arch with the name of the Theosophical Society in America and the TS emblem in the center. Originally a lighted lantern hung from the emblem, but it had to be removed in later years when vehicles became taller.

As I look out my office window a car stops at our gateway, as cars often do, while its occupants read the bronze plaques on its pillars, moving from the one to the other to read the whole of the statements they contain as to the founding, the Founders and the principles. The car passes on, but our Headquarters has made its impression; the breadth and dignity of our principles have sown seed. [2] 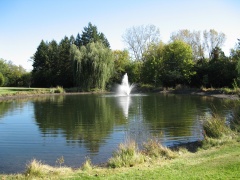 Land at the south central portion of the estate was donated by Georgine Shillard-Smith for an arts center. Funding for the building was never available, and eventually, President James S. Perkins decided to follow the natural flow of water across the land and create a pond on that site. He himself operated the construction equipment used to carve it out, and the pond was named after him. It serves as a beautiful focal point of the park and as a means of water retention in rainy seasons, enjoyed by visitors and by ducks, geese, frogs, and fish.

In 1969, a new building was constructed to house the Theosophical Publishing House and the Quest Bookshop. The cornerstone ceremony took place on July 18th during the annual convention. Joy Mills, James S. Perkins, and TPH Manager Stephen Kellogg spoke at the ceremony, crediting support of The Kern Foundation in the greatly increased publishing activity that justified the new construction.[3] Most of the ground floor originally served as a book warehouse and shipping room, with offices located on the upper floor. After a separate warehouse was built, the Mills Building was remodeled to move offices to the ground floor. The upper level was converted into apartments for resident staff. Another round of remodeling in 2006 improved the Bookshop and office spaces.

In the mid-1950s, members of the Young Theosophists at Wheaton constructed a stone circle and fire pit near the western edge of the campus. It has been used in recent years for campouts and is popular for drumming groups. The fire pit has also been used by the Prairie School of DuPage to boil down sap from campus trees to make maple syrup.

In 2001, a seven-circuit Cretan-style labyrinth was constructed at the west side of the property. Many visitors enjoy walking the pattern, including church groups on labyrinth tours. "You walk the Olcott labyrinth by entering from the northwest, where the stepping-stone path begins. You follow the path to the center, where you may wish to pause for a few moments. Then you reverse your direction and retrace your path back out to the starting point. In walking any labyrinth, you should always complete the pattern by following the path both inward and outward, rather than cutting across the pattern at any point. The inward movement needs to be complemented by a corresponding outward return."[4] 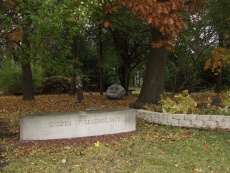 The Garden of Remembrance was established as a serene setting for meditation and for remembering loved ones who have passed away. The concept was modeled after the garden of the same name at the international headquarters at Adyar, India.