Difference between revisions of "Patanjali" 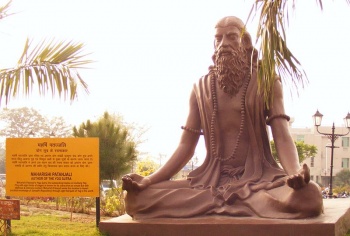 Patañjali (devanāgarī: पतञ्जलि) is regarded as the compiler of the Yoga Sūtras, an important collection of aphorisms on Yoga practice.

There have been, however, other prominent men named Patañjali in the history of Hindu thought. One of them a famous grammarian from the 2nd century B.C., who wrote a commentary on Pāṇini's Ashta-Adhyayi (Eight-Lessons in Grammar). Another Patañjali was an author of the Nidana-Sūtra (Aphorisms on Origin), which is also an important work of Vedic ritual literature.

The dates proposed for the birth of the author of the Yoga-Sūtra vary by a millennium. Some authorities suggest that he lived in the 4th century BCE, while others insist that he must have lived in the 6th century CE. According to Mme. Blavatsky he was a contemporary of Pânini, and lived nearer 700 than 600 B.C.[1]

Virtually nothing is known about him. According to Hindu tradition he was an incarnation of Sesha Nāga (also known as Ananta) the thousand-headed ruler of the serpent race. Ananta, desiring to teach Yoga on Earth is said to have fallen from heaven onto the palm of a virtuous woman named Gonika.

Patañjali's most important contributions is that he organized the practice and experiences of Yoga into a philosophy that can compete with other contemporary schools of thought.