Plane is a term that in some spiritual and esoteric philosophies is used to refer to a locality or dimension, which can be physical or non-physical. The original source of the word "plane" in this context seems to be the late Neoplatonist Proclus, who frequently used the word platos (πλάτος) meaning "amplitude, breadth, broadness, width", as in the expression en to psuchiko platei.[1]

Plane. From the Latin planus (level, flat) an extension of space or of something in it, whether physical or metaphysical, e.g., a “plane of consciousness”. As used in Occultism, the term denotes the range or extent of some state of consciousness, or of the perceptive power of a particular set of senses, or the action of a particular force, or the state of matter corresponding to any of the above.[2]

A plane may be defined as a state marked off by clear characteristics; it must not be thought of as a place, [Page 9] as though the universe were made up of shells one within the other like the coats of an onion. The conception is metaphysical, not physical, the consciousness acting on each plane in fashion appropriate to each.[3] 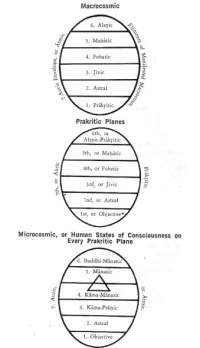 The Theosophical literature postulates that the universe is seven-fold:

Our philosophy teaches us that, as there are seven fundamental forces in nature, and seven planes of being, so there are seven states of consciousness in which man can live, think, remember and have his being.[4]

This septenary structure repeats itself at the level of the universe, the solar system, the earth, the human being, etc. Although the higher universal planes are beyond the human conception, the lower are within the range of human endeavor:

Believing in seven planes of Kosmic being and states of Consciousness, with regard to the Universe or the Macrocosm, we stop at the fourth plane, finding it impossible to go with any degree of certainty beyond. But with respect to the Microcosm, or man, we speculate freely on his seven states and principles.[5]

H. P. Blavatsky described the manifested universe and everything in it as being sevenfold. She claimed the states of consciousness in the universe as a whole (frequently called "Kosmos" by her) was beyond the possibility of explanation. Therefore, she limited herself to describe the seven principles in the solar system (called macrocosmos) which are reflected in human beings (microcosmos):

The student will observe that the study of the States of Consciousness is confined to Consciousness as manifesting in the solar system. Any attempt to figure Consciousness in KOSMOS would have deceived the student by inducing him to believe that such Kosmic Consciousness could be explained, whereas the whole of even the lowest plane of Kosmos transcends the highest Adept on earth.[6] 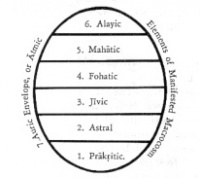 2nd- Astral: The Astral model, reflecting on the lower planes.

1st- Prakiti: The physical plane of the solar system, which is again divided into seven sub-planes.

This diagram represents the type of the solar system.


The three higher divisions of this plane are inconceivable to us, and are only reached by the highest Adept in Samâdhi. Esoterically, Samâdhi is the highest state on earth attainable while in the body. Beyond that the Initiate must become a Nirmânakâya. The highest Adept begins his Samâdhi on the fourth macrocosmic plane, and cannot pass out of the solar system. When such an Adept begins his Samâdhi, he is on a par with some of the Dhyâni-Chohans, but transcends them as he rises to the seventh plane, Nirvâna.
The “SILENT WATCHER” [see The Secret Doctrine, Vol. I, pp. 207, 208] is on the fourth plane.


The Pratyeka-Buddha, the Buddha of Selfishness––called because of this spiritual selfishness “the rhinoceros,” the solitary animal––can never pass beyond the third plane, that of Jîva. Such a one has conquered, indeed, his material desires, but he has not yet freed himself from his mental and spiritual longings. It is the Buddha of Compassion only that can transcend this third macrocosmic plane.[7]

Although human beings cannot perceive these higher planes, there is a correspondence between them and his principles, and therefore, he can experience their reflection on his own level:

These seven planes correspond to the seven states of consciousness in man. It remains with him to attune the three higher states in himself to the three higher planes in Kosmos. But before he can attempt to attune, he must awaken the three “seats” to life and activity.[8]

The lowest, or first, macrocosmic plane is called "prakritic":

This plane is also divided into seven sub-planes, as follows:

Mme. Blavatsky only explained the different states of consciousness experienced on the Astral Prakritic plane and the Objective Prakritic, or Terrestrial (see below).

C. W. Leadbeater explained the relationship between the terrestrial planes and the Prakritic as follows:

Each physical globe has its physical plane (including its atmosphere), its astral plane, and its mental plane, all interpenetrating one another, and therefore occupying the same position in space, but all quite apart from and not communicating with the corresponding planes of any other globe. It is only when we rise to the lofty levels of the buddhic plane that we find a condition common to, at any rate, all the planets of our chain.
Notwithstanding this, there is, as stated above, a condition of the atomic matter of each of these planes which is cosmic in its extent; so that the seven atomic sub-planes of our system, taken apart from the rest, may be said to constitute one cosmic plane - the lowest, sometimes called the cosmic-prakritic. The interplanetary ether, for example, which appears to extend through the whole of space - indeed must do so, at least to the farthest visible star, otherwise our physical eyes could not perceive that star - is composed of physical ultimate atoms in their normal and uncompressed condition. But all the lower and more complex forms of ether exist only (so far as is at present known) in connection with the various heavenly bodies, aggregated round them just as their atmosphere is, though probably extending considerably further from their surface.[10]

The first, or lowest of the prakritic plane, is called the Objective Prakritic or Terrestrial. It is also divided into seven sub-planes as follows:

7. Atmic consciousness, that of the Para-Ego.

1. Objective (plane of the senses)

The states of consciousness on the seven subplanes of this Terrestrial plane have been described as follows:

1. Objective Sensuous Consciousness. The consciousness that pertains to the five physical senses in man and rules in animals, birds, fishes, some insects, etc. Here are the “Lives”; their consciousness is in Âtma-Buddhi; they are entirely without Manas.

2. Astral Instinctual Consciousness. The consciousness of sensitive plants, of ants, spiders, and some night-flies (Indian), but not of bees. Among other animals the non-mammalian vertebrates are without this consciousness, but the placental mammals have all the potentialities of human consciousness, though of course dormant, or latent, at present. On this plane is the consciousness of idiots. The common phrase, “he has lost his mind,” is an occult truth; for when, through fright or other cause, the lower mind becomes paralyzed, then the consciousness acts on the astral plane. The study of lunacy will throw much light on this point. This may well be called the “nerve plane.” It is cognized by our “nervous senses,” of which, as yet, modern physiology knows nothing. Hence it is that a clairvoyant can read with the eyes bandaged, with the tips of the fingers, the pit of the stomach, etc. This consciousness is greatly developed in the deaf and dumb. On this plane everything is reversed, reflected upside down.

3. Kâma-Prânic, or Physiological-Emotional Consciousness. This is the general life-consciousness which belongs to the objective world, even to the stone; for if the stones were not living they could not decay, crumble away, or emit a spark. Affinity between chemical elements is a manifestation of this, Kâma-Prânic consciousness. To this plane, also, belong the life-preservative instincts, as for instance that which prevents a kitten going into the water and getting drowned. [A stone could not crumble unless there was life throughout it; for the crumbling is not due only to friction by water, air, etc., or the action of frost, but to the fact that every particle in the stone is in a state of active vibration, performing rhythmical motions, not in a state of inertia. These life-waves, pulsing in the stone, throw its molecules apart, thus enabling foreign matters and influences to enter between them, force them farther apart, and so cause crumbling away. Even this is not all: the vibratory action of the life itself, apart from any interference from without, tends to ultimately disrupt the combinations of molecules that make up the stone.]

4. Kâma-Mânasic, or Psychic, or Passional-Emotional Consciousness. In animals and idiots the instinctual consciousness on the lower planes of sensation is in this state; in man these are rationalized. For instance, if a dog is shut up in a room, it has the instinct to get out, but is unable to do so because this instinct is not sufficiently rationalized to take the means necessary for its liberation. A man at once takes in the situation, and lets himself out. The highest degrees of this Kâma-Mânasic consciousness are psychic, there being within this sub-plane, as with all others, seven degrees from the instinctual and psychic.

5. Mânasic or Mental-Emotional Consciousness. From this plane Manas stretches up to Mahat.

6. Buddhic, or Spiritual Emotional Consciousness. The plane of Buddhi or of the Auric Envelope. From this plane consciousness goes to the “Father in Heaven,” Âtman, reflecting all that is in the Auric Envelope. The Mânasic and Buddhic states cover the planes from the Noëtic to the Divine, but it is impossible at this stage to define them intelligibly. Call the highest plane x if you will. You can’t understand it.[11]

In the teachings of the "Inner Group" there is the following additional information was given:[12]

1. This objective, or sensuous, plane is that which is sensed by the five physical senses.

2. On its second plane, objects are reversed.

3. Its third plane is psychic, here is the instinct which prevents a kitten going into the water and getting drowned.

The following table of the terrestrial consciousness was given:

Human beings are the microcosmos of the macrocosmos. They also show a septenary consciousness:

This figure represents the human consciousness, which may be on any of the planes or sub-planes of Prakriti. The names represent the correspondences of the human principles, so called, with the Prâkritic and the macrocosmic States of Consciousness.[13]

These states of consciousness take place on any of the Prakritic planes.

Annie Besant and C. W. Leadbeater offered a modified organization of the planes, not based on the different states of consciousness possible in them, as H. P. Blavatsky did, but on the kind of matter they are composed of. Thus, they regarded the Manasic and Kama-Manasic planes as being really one, the mental plane, which can be subdivided into higher (manasic) and lower (kama-manasic). Their Astral plane included Blavatsky's Pranic-Kamic and Astral (or at least its higher sub-planes), while the physical plane could be subdivided in two: the "dense" half (which corresponds with the "objective"), and the etheric (which probably corresponds with the lower subplanes of Blavatsky's "astral". Buddhi and Atman remain the same.