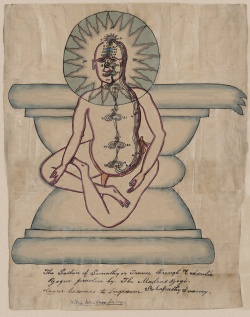 Illustration from Om, as restored digitally by Richard Dvořák

Sabhapaty Swami was an Indian scholar from Madras who was acquainted with Theosophical Society Founders Helena Petrovna Blavatsky and Henry Steel Olcott. He was born in Madras in 1840. In 1880 he met the Founders in Lahore, and he moved back to Madras about the time the Adyar headquarters was established for the Theosophical Society. He published a number of scholarly works until the early 1890s, when he disappeared from the historical record. No death date has been determined.

Colonel Olcott owned a copy of his book Om: A Treatise on Vedantic Raj Yoga Philosophy that is still on the shelves of the Adyar Library and Research Centre. It is the original 1880 edition, and is very rare. In January, 2016, a group of librarians, photographers, archivists, and scholars from around the world worked together to get the book photographed. The original illustration was damaged, and has been digitally restored by Richard Dvořák. A searchable PDF file of the book has been cataloged as a digital object by the Henry S. Olcott Memorial Library and is also available here. Dr. Karl Baier of the University of Vienna wrote of the third handwritten line: "The (partially) missing word could originally have been sthūlaśarīra ('physical body,' sthūla meaning coarse) a Sanskrit word that especially in 19th century texts is sometimes written as sthulsarir."