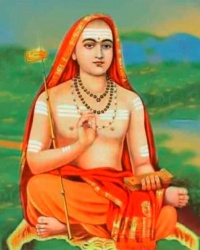 Śaṅkarācārya also known as Adi Shankara, Ādi Śaṅkarācāri, Śaṅkara Bhagavatpādācārya and Ādi Śaṅkarācārya was an Indian philosopher who consolidated the doctrine of Advaita Vedānta. Modern scholarship places his life from 780 CE to 820 CE. T. Subba Row disputed this, claiming that he was born in the year 510 B.C.

H. P. Blavatsky wrote about him what follows:

Shamkara was an Avatâra in the full sense of the term. According to Sâyanâchârya, the great commentator on the Vedas, he is to be held as an Avatâra, or direct incarnation of Siva—the Logos, the Seventh Principle in Nature—Himself. In the Secret Doctrine Srî Samkarâchârya is regarded as the abode—for the thirty-two years of his mortal life—of a Flame, the highest of the manifested Spiritual Beings, one of the Primordial Seven Rays.[1]

She also said that Shankara used the "middle Principles" of the Buddha to incarnate.[2]

There are no reasons for placing Sankara in 8th or 9th century after Christ as some of the European Orientalists have done. . . . We may perhaps now venture to place before the public the exact date assigned to Sankaracharya by Tibetan and Indian Initiates. According to the historical information in their possession he was born in the year B. C. 510 (51 years and 2 months after the date of Buddha’s nirvana), and we believe that satisfactory evidence in support of this date can be obtained in India if the inscriptions at Conjeeveram, Sringeri, Jagannâtha, Benares, Kashmir and various other places visited by Sankara are properly deciphered.[3]

Shankara's works, written in Sanskrit, elaborate on ideas found in the Upanishads, discussing the unity of the ātman and Nirguna Brahman, the "brahman without attributes". Copious commentaries on the Vedic canon (Brahma Sutras, Principal Upanishads and Bhagavad Gita) and the Yoga Sutras of Patanjali are attributed to him, although their authorship is not certain.