Russian noblewoman Helena Petrovna Blavatsky and American Colonel Henry Steel Olcott founded the Theosophical Society with attorney William Quan Judge and others in late 1875 in New York City.[2] After his two major co-founders departed for India in 1879 to establish the international headquarters of the Society in Adyar, India (near Madras, now known as Chennai), young Mr. Judge earnestly carried on the work of advancing interest in Theosophy within the United States. By 1886 he had established an American Section of the international Society with branches in fourteen cities. Rapid growth took place under his guidance, so that by 1895 there were 102 American branches with nearly six thousand members.[3] Madame Blavatsky died in 1891, leaving Colonel Olcott and English social activist Annie Besant as the principal leaders of the international movement based in Adyar, and William Quan Judge heading the American Section.

Five American lodges that had opposed the 1895 secession retained their affiliation with the international Society in Adyar, along with additional lodges that had not sent representatives to the 1895 convention. They formed a new American Section known as the American Theosophical Society under the leadership of Alexander Fullerton.[9] Extensive lecture tours by Annie Besant and Constance Wachtmeister elicited much new interest in the American Theosophical Society,[10] so that by 1900 the organization claimed 1286 members and 71 branches.[11]

The American Theosophical Society was legally renamed "The Theosophical Society in America" in 1934, and has existed under that name ever since.[12] Like other Theosophical groups, the organization aspires to educate the public about the principles of Theosophy through publications, public programs, and local group activities. A video of Society history is available.

The modern Theosophical Society in America (TSA) is a member-based not-for-profit corporation. It is incorporated in the state of Illinois with federal 501(c)(3) tax-exempt status. The national headquarters has been located in Wheaton, Illinois since 1927. About 115 local groups include branches (also called lodges) and smaller study centers. As of 2008, the membership comprised about 4000 people. A considerable number of members-at-large are affiliated directly with the national center.

The administrative center of the TSA (called "Olcott" in honor of the President-Founder) is located in Wheaton, Illinois.

The Theosophical Society in America is composed of individuals united by their concurrence with its three Objects, by their dedication to promoting brotherhood, and by their interest in study and spiritual self-transformation. Theosophists consider that belief should be the result of individual study, experience, and insight, rather than reliance on dogma. They see each religion as an expression of Divine Wisdom, adapted to the needs of a particular time and place. Theosophy regards the universe as alive and interrelated, with an intelligent order guiding the cyclical evolution of all life. The Theosophical Society in America supports the right of individual freedom of thought for every person, and no doctrine is in any way binding on any member of the Society.[13]

TSA philosophy is also represented in the Theosophical Worldview statement.

The three declared Objects of the Theosophical Society (Adyar) are:

For more information and a history of changes in the wording, see Objects of the Theosophical Society.

Theosophical Society in America has a Vision of wholeness that inspires a fellowship united in study, meditation, and service.

Its Mission is to encourage open-minded inquiry into world religions, philosophy, science, and the arts in order to understand the wisdom of the ages, respect the unity of all life, and help people explore spiritual self-transformation.[15]

Its Ethic holds that our every action, feeling, and thought affects all other beings and that each of us is capable of and responsible for contributing to the benefit of the whole.

The TSA is governed by a Board of Directors that meets at the national headquarters. Officers include a president, vice president, national treasurer, and national secretary. Two directors are elected by members from each of three geographical districts in the United States.

The national president also has the title of General Secretary for the American Section of the Theosophical Society (Adyar) based in Chennai, India, and participates in the General Council that governs the international Society. These are the presidents since the 1895 reorganization of the American Society:

Under Alexander Fullerton, the American Theosophical Society (now known as Theosophical Society in America) was based in New York City, but his successor, Dr. Weller Van Hook, moved the headquarters to Chicago in 1907. A. P. Warrington transferred operations to Hollywood in 1912, where the Theosophical colony of Krotona was established. Most of the colony moved north in 1924 to Ojai, California to become the Krotona Institute of Theosophy, while the headquarters returned to Chicago in 1920 when L. W. Rogers took office. 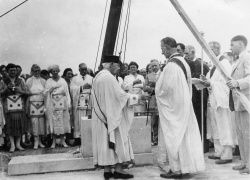 During his presidency, Mr. Rogers sought to establish a permanent headquarters in a central and accessible location. He led a search for land where a new headquarters could be established. Dozens of sites within 500 miles of Chicago were considered before an appropriate property was located in Wheaton, Illinois. This western suburb of Chicago met all the search criteria in that it was centrally located, with excellent rail transportation, a serene rural atmosphere, and affordable land. In 1925 the Society purchased almost 10 acres (4 hectares)of farmland, and immediately began planting a grove of trees.[16] This is currently known as the Olcott Center, named in honor of the President-Founder of the Theosophical Society, Colonel Henry Steel Olcott.

At the recommendation of Theosophist and architect Claude Fayette Bragdon, the Chicago architectural firm of Pond & Pond, Martin & Lloyd was engaged to design the headquarters building. Annie Besant laid cornerstone on August 29, 1926 in a ceremony that was attended by Jiddu Krishnamurti and a huge crowd.[17] In September 1927 staff members moved operations to the new structure, which was eventually named the L. W. Rogers Building.[18] Designed in a collegiate gothic style by Irving Kane Pond, the three-story building consists of offices, library, classroom, auditorium, meditation room, kitchen, dining room, garage, and residential wing for staff members and visitors. In 1931 Mrs.Shillard-Smith, commissioned painter Richard Blossom Farley to create the colorful mural of evolving life that is still on view in the two-story lobby.[19]

Books and periodicals have always been extremely important to Theosophists as tools for study. In 1922, L. W. Rogers established the national library,[20] and when the headquarters building was constructed in Wheaton a two-story library was incorporated into the design. The original space was expanded in 1962-63 to add offices, meeting rooms, stacks, and basement storage.[21]

The Henry S. Olcott Memorial Library houses books, periodicals, pamphlets, microfilm, videos, and audio recordings. The collection focuses on Theosophy, religion, science, philosophy, art, biography, and health. The reading room is open to the public six days each week; members of the Society and other library patrons can borrow library materials by mail or in person. The library belongs to a consortium of libraries within the RAILS (Reaching Across Illinois Library) System. Through that relationship and the OCLC interlibrary loan system, the library loans materials locally and throughout the United States. The Olcott Library works in close cooperation with the Emily Sellon Memorial Library at the New York Theosophical Society, and the Krotona Library in Ojai, California.[22]

Archival collections include organizational records, and also special collections of papers from Boris de Zirkoff, Mary K. Neff, Fritz and Dora Kunz, and others. Records of the American Theosophical movement before 1896 are in the archives of the Theosophical Society (Pasadena).

The national center and local groups offer lectures, study groups, workshops, and other programs to members and the general public. Subject matter is wide-ranging to facilitate the study of modern Theosophy, comparative religion, philosophy, science, health, and art. Other classes have included Hatha yoga, qigong, Therapeutic Touch, and many forms of meditation.[23]

The Theosophical Society in America has published books, pamphlets, and periodicals since its earliest days under the auspices of the Rajput Press and the Theosophical Book Concern. The Theosophical Publishing House now publishes books under the Quest Books imprint on a broad array of topics including Theosophy, transpersonal psychology, comparative religion, ecology, spiritual growth, and health.

Quest magazine focuses on Theosophy, philosophy, religion, science, and the arts; articles from some past issues are available online. Messenger is a newsletter for members, providing news of organizational activities and board actions. A free monthly electronic newsletter is distributed by e-mail to members and other interested people, and past issues are online. Many of the branch locations, federations, and retreat centers produce their own newsletters and program listings.

Quest Bookshops are commercial enterprises operated by the Theosophical Society in America and its affiliates to sell books, recordings, and other items of interest to students of Theosophy. Locations include shops in Wheaton, Illinois; New York City; Seattle; and Ojai, California at Krotona Institute of Theosophy.

The Theosophical Order of Service (TOS) engages in service projects in seven areas: animal welfare; art and music; ecology; family and children; healing; peace; and social service. It has a website.

Order of the Knights of the Round Table sponsors activities for children and adults, and Young Theosophists (YT) is a young adult group.

Other Theosophical societies in the U. S.

The Pasadena-based group is composed (as of 2009) of sections in nine countries, and offers a library, correspondence courses, study groups, publications, and an extensive array of full-text Theosophical literature on its web page. Members supplement study of the Helena Blavatsky works with writings by William Quan Judge, Katherine Tingley, Gottfried de Purucker, and others.[24]

The ULT, founded by Robert Crosbie, is dedicated to the study of the writings of Helena Blavatsky and William Quan Judge as printed from original plates or from photographic reproductions of original texts. Twenty-two lodges and ten study groups are located in fourteen countries.[25]

Other Theosophical groups in the United States include the Theosophical Society Point Loma-The Hague, with headquarters in The Netherlands, and the Temple of the People in Halcyon, California. There are also smaller independent groups in various cities.