Difference between revisions of "World Congress of the Theosophical Society (Adyar)"

From time to time, the Theosophical Society based in Adyar holds a World Congress. 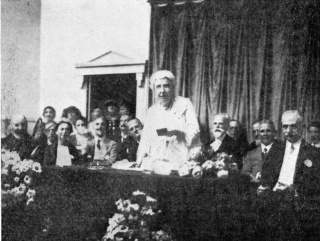 The First World Congress was held in Paris, France, in 1921. Clara Codd wrote of Annie Besant's lecture: "When she spoke to the Sorbonne at the First World Congress we held in Paris, we all gave up our seats to accommodate the thronging French crowds, for Mrs. Besant spoke in French."[1]" B. P. Wadia spoke on Will the Soul of Europe Return? The Rapp Square headquarters building of the French Section was dedicated during this congress. Professor Jean Émile Marcault "was one of the outstanding features of the World Congress" in his excellent translations of speeches from French to English and English to French.[2]

The Second World Congress was held in Adyar, Chennai, India, in 1925. 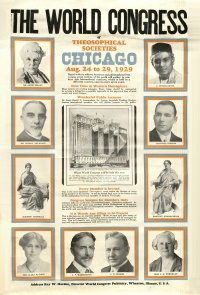 The meetings of the World Congress were held in the Ball Room of the Stevens Hotel. It was combined with the Convention of the American Section. As the United States is so far away, the only European delegate was the veteran Russian, Madame Kamensky...

Mr. Hodson was the star speaker after Dr. Besant, and the Congress and Convention closed as was the custom with the American Section in those days, with a huge banquet, at which everyone had to tell a story.[3]

Many of the speakers stayed after the congress to assist with the Summer School held in the new Wheaton headquarters. The published Proceedings of the school included transcribed lectures by Annie Besant, Max Wardall, Geoffrey Hodson, L. W. Rogers, and George Arundale.

The Fourth World Congress was held in Geneva, Switzerland, in 1936. Clara Codd described that event:

This time we met in the Hall of the League of Nations, generously lent to us for the occasion. We each sat at a large table. Underneath it a disc cold be turned and ear phones were attached. There were eight points to which one could turn the disc, and at each one heard through the ear phones a current translation of the speech being delivered, in any one of eight languages. This was done by an interpreter sitting in a little booth under the stage, and speaking the translation into a telephone simultaneously with the speaker...

At Geneva I saw again some for my American friends. The American General Secretary, Mr. Sidney A. Cook, had brought over such a lovely blue and silver car that it attracted Swiss crowds wherever it was parked.[4] 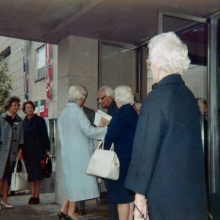 The Sixth World Congress, or Centennial World Congress, was held in New York City, United States, in 1975. It celebrated the centenary of the founding of the Theosophical Society, and was followed by major celebrations in London and Adyar. According to one observer, the lecture by Boris de Zirkoff called "The Dream that Never Dies," was "truly a high point of that week-long gathering."[6] That and many other centennial lectures were recorded and are available at the Henry S. Olcott Memorial Library.

The Seventh World Congress was held in Nairobi, Kenya, in 1982. The theme was "Live to Benefit Mankind."

The Eighth World Congress was held in Brasilia, Brazil, in 1993. The theme was "Towards a Wise Mind and a Noble Society."

The Ninth World Congress was held in Sydney, Australia, in 2001. The theme was "In Tune With the Universe."

The Tenth World Congress was held in Rome, Italy, in 2010. The theme was "Universal Brotherhood without Distinctions: a Road to Awareness."

The Eleventh World Congress was held August 4-9, 2018, in Singapore.