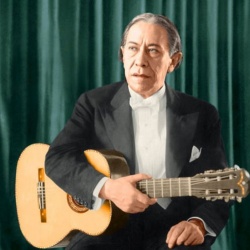 Agustín Pío Barrios was a Paraguayan composer and virtuoso performer of classical guitar music who was influenced by Theosophy. He sometimes used the names Agustín Barrios Mangoré and Nitsuga Mangoré in homage to Paraguay's native Guarani culture. Nitsuga is Agustin spelled backward. 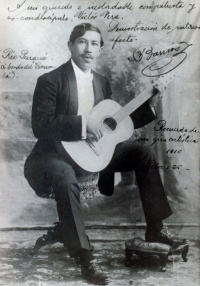 Agustín Pío Barrios was born on May 5, 1885 Paraguay to Doroteo Barrios and Martina Ferreira. There is some question of the location of his birth, which may have been in San Juan Bautista or in nearby Villa Florida, both of which are in the southern department [state] of Misiones. His family had great appreciation of the arts, and sent Agustin to study in the capital city of Asunciόn. At the age of fifteen he received a music scholarship at the Universidad Nacional de Asunciόn, and developed great interest in philosophy, literature, and mathematics. He spoke Spanish and Guarani, but could also read English, French, and German. In addition to music, Barrios was quite talented in poetry and in drawing.

From 1903-1908, Barrios worked at various office jobs, but later was able to support his household with his music.

He died on August 7, 1944 in San Salvador, El Salvador, where he had been employed as a professor for several years.

Theosophist Professor Viriato Díaz Pérez was a strong influence on Barrios during his early years in Asunción, both intellectually and socially:

Viriato Díaz Pérez, a Spaniard by birth who emigrated to Paraguay in the early 1900's. An intellectual, author of numerous books and articles, literary critic and teacher, Diaz Perez was also a follower of theosophy. He reputedly introduced Barrios to theosophic doctrines and beliefs. Diaz Perez's influence on him, particularly in the areas of aesthetics, philosophy and metaphysics was profound.

Díaz Pérez had an "international" perspective and strongly urged Barrios to leave Paraguay. In January of 1910, he wrote a letter of introduction to an Argentine friend, Señor Mario Villar Sáenz Valiente, publisher of the Buenos Aires newspaper La Nación. . . He was the nephew of Roque Sáenz Peña, President of Argentina from 1910-14. . . Valiente, after hearing Barrios play in the town of Corrientes, invited him to come to Buenos Aires under his patronage.[2]

In 1912, Díaz Pérez was a founder and first President of the first Theosophical Society lodge established in Paraguay. During the 1929 lecture tour of C. Jinarajadasa, the Paraguayan lodges were chartered into a national Section.[3] Possibly Barrios participated in lodge activities in Asunción.

His religious convictions were more "theosophical" than strictly "Catholic". For him God and Nature are inextricably part of one another, and Man, being part of Nature, is part of God. The only substantiated comments made by Barrios regarding his religious views come from the Brazilian newspaper Jornal do Recife of January 5,1931:

In spite of a severe religious education, my primitive pantheism has pointed me in the direction of Theosophy, the most human and rational of philosophic concepts. I believe in the immutable laws of Nature. And Humanity and the Good impregnate my spirit as the ethical end of all existence.

Here his references to "severe religious education" and "primitive pantheism" are more an accommodation to bolster his identity as Chief Nitsuga Mangore than an accurate statement of facts. But his mentioning theosophy and the "immutable laws of Nature" can be seen as sincere and genuine. Barrios was a humanist, an idealist, a romantic. He intuitively recognized that there is a relationship between the good, the true and the beautiful and that all these realities are reflected in love towards life and one's fellow beings. Recognition of and resignation to these truths are powerfully expressed in the major key section of his last piece Una Limosna por el Amor de Dios – the composition closes with a definite affirmation of these eternal values that Barrios achieved and manifested throughout his life: love being the process, and truth, beauty and goodness being the byproducts.[4]

Late in his life Barrios was also associated with Theosophist General Maximiliano Hernández Martínez (1882-1966), the President of El Salvador, who arranged for Barrios to have a professorship in San Salvador. Hernández Martínez joined the Theosophical Society in El Salvador in 1931, serving as president of the Teotle Lodge and as the General Secretary of the Section. During World War II he became a member of the Theosophical Society in America, joining the Brotherhood Lodge on October 15, 1944 while living in New Orleans, and then transferring to the Florida Group after a move to Miami Beach. He subsequently lived much of the rest of his life in Honduras, but maintained a membership in the Miami Lodge.[5] While Hernández Martínez was interested in the occult and believed in reincarnation, his brutal actions as President of El Salvador do not reflect Theosophists' commitment to brotherhood.

It seems likely that Barrios participated in the Teotle Lodge in the early 1940s, from his own interest and out of respect to his powerful patron.

During the course of his musical career, Barrios toured extensively to perform concerts. He composed more than 100 original works, and made at least 200 arrangements of works by other composers including Bach and Beethoven. His classical guitar performances were recorded as early as 1909. Early concerts were in Paraguay, Argentina, and Brazil.

In the 1930s he began to appear in concerts wearing clothing that reflected the native Guarani culture of Paraguay. In concert he performed his own compositions under the name "Mangoré" or "Nitsuga Mangoré" for the first half of the program, wearing native attire such as a feathered headdress. After an intermission he reappeared in formal European clothing to play traditional classical guitar works and Bach.

In 1935 he spent a year with the Paraguayan ambassador to Mexico, Tomás Salomonis, traveling to Belgium, Germany and Spain with performances in Brussels and Madrid. After leaving Europe, he toured in in Venezuela, Haiti, Cuba, Costa Rica, Nicaragua, El Salvador, and Guatemala.

The style of Barrios' original compositions has been called "late Romantic." Central and South American folk songs influenced his work.

His revered 1921 composition La Catedral was inspired by the music of Johann Sebastian Bach played on a pipe organ in a cathedral. In addition to becoming a staple of classical music repertoire, this work has been transcribed for piano, harpsichord, and marimba. 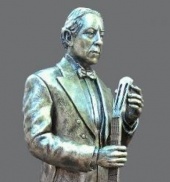 Barrios is a great source of national pride in his native country. A bank note in the denomination of 50,000 guaranies was issued by the government of Paraguay, with a portrait of Barrios on the front and a guitar on the back. In 1994 several stamps were issued to honor the 50th anniversary of Barrios' death. The Ministerio de Educación y Ciencias named a school after the artist in Villa Elisa, a city on the outskirts of Asunciόn.

A bust by sculptor Juan Gilberto Núñez was installed in the Teatro Municipal “Ignacio A. Pane” de Asunción. An international guitar competition is named for Agustin Barrios and features performance of his compositions. 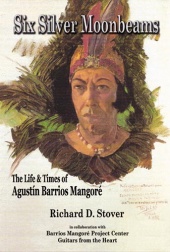 Dozens of musicians have recorded performance of Barrios compositions on YouTube and other Internet platforms. For example, a YouTube search of "La Catedral Barrios" provides well over 100 results. Numerous master classes and biographical videos are also available. Here are examples: