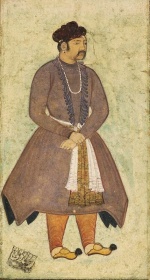 Abu'l-Fath Jalal ud-din Muhammad Akbar, popularly known as Akbar I, literally "the great" (October 15, 1542 – October 27, 1605) was Mughal Emperor from 1556 until his death. He was the third and one of the greatest rulers of the Mughal Dynasty in India.

To unify the vast Mughal state, Akbar established a centralised system of administration throughout his empire and adopted a policy of conciliating conquered rulers through marriage and diplomacy. To preserve peace and order in a religiously and culturally diverse empire, he adopted policies that won him the support of his non-Muslim subjects. Eschewing tribal bonds and Islamic state identity, Akbar strived to unite far-flung lands of his realm through loyalty. He also formed a new religion, Sulh-e-kul meaning universal peace. His idea of this religion did not discriminate other religions and focused on the ideas of peace, unity and tolerance.