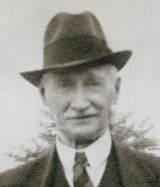 A. E. S. Smythe first met William Quan Judge when by coincidence they both embarked on the British steamer SS Wisconsin from Liverpool to the United States. They sailed on November 15, 1884 and landed in New York on the 26th. He gave this account:

Judge was a master of ordinary conditions and could get te honey out of the merest weed. To know him was to love him... He walked the decks with those who needed a companion, he played cards, except on Sunday when he drew the line, he played deck quoits, and he chatted... He was cheerful and thoughtful of others, and as we neared the end of our ten-day voyage he drew upa memorial, decorated with his attractive penaship and we all signed it as a tribute to the Captain.[1]

In 1919 Mr. Smythe became General Secretary of the Canadian Section in the Theosophical Society, Adyar. He was editor of The Lamp from 1894 to 1900, The Canadian Theosophist, and from 1928 to 1935 of The Hamilton Herald.[2]

Mr. Smythe was a well-regarded lecturer.

On November 7 Mr. Albert E. S. Smythe, General Secretary of the Canadian Section, was in San Francisco and kindly offered to speak for the San Francisco Lodge. In the evening he delivered a lecture on "Theosophy's Message - Brotherhood" to a large and appreciative audience, who listened attentively while the various principal tenets of our philosophy were explained in clear and convincing language. The lecturer is fluent of speech and illustration, and at times rises to heights of eloquence.

The following afternoon Mr. Smythe answered questions at the regular class, and on that same evening left for Los Angeles. Our only regret was that he could not remain longer.[3]

Upon his death on October 2, 1947, The American Theosophist quoted Col. E. L. Thomson as saying, "We have lost a great man, a brilliant mind, an indefatigable worker, a great friend and his place will not be easily filled."[4]

His son Conn was also a Theosophist, and book steward for Toronto Lodge. While serving in the military during World War I, Conn Smythe became a prisoner of war in Germany.[5]

The first publication of the Alexandria West Library, Troubled Emissaries by Brett Foray, was dedicated to Mr. Smyth, Dr. Henry Newlon Stokes, and Dr. John Cooper in honor of their contributions to history of the modern Theosophical movement.