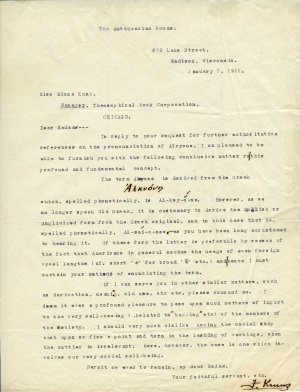 Pronunciation of "Alcyone" was discussed in a letter from Fritz Kunz to his sister Minna. Image from TSA Archives.[1]

Alcyone was the "star name" assigned to Jiddu Krishnamurti in Lives of Alcyone published by Annie Besant and C. W. Leadbeater. The term was used for only a short time within the Theosophical Society headquartered in Adyar, Chennai, India and was never used in the other branches of the Theosophical Movement. It was, however, the name under which many of Krishnamurti's early writings were published, including At the Feet of the Master.

Pronunciation of the term

Much discussion took place initially about the pronunciation of the name, with astronomers, scholars of ancient Greek, and ordinary people expressing different viewpoints. Fritz Kunz wrote an amusing letter to his older sister Minna on the subject, on January 7, 1911. His advice probably influenced this announcement that the American Theosophical Society made later that year:

Pronunciation of "Alcyone": - The Century and Webster's dictionaries, Appleton's Encyclopedia and many other authorities give, without exception, the pronunciation of Alcyone indicated: Al-si'-oh-nee (I long).[2]

The modern pronunciation in English, according to the International Phonetic Alphabet ( IPA), is ælˈsaɪəˌni, like the version in the 1911 dictionaries. However, the Greek word Ἁλκυόνη is Halkyónē or "hal-kee-oh'-nee".

Mainstream uses of the term

In astronomy, Alcyone (designated as Eta Tauri) is a multiple star system in the constellation of Taurus. Approximately 440 light years from the Sun, it is the brightest star in the Pleiades cluster.

In Greek mythology, Alcyone is one of the seven daughters of Atlas and Pleione known as the Pleiades.