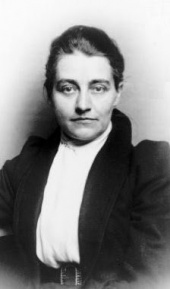 Alice Leighton Cleather was an English Theosophist and Buddhist known for her writings about Helena Petrovna Blavatsky (HPB).

Miss Cleather was admitted as a member of the London Lodge on November 11, 1885.[1] She was a pupil of H. P. Blavatsky beginning in 1887. She was a member of her Esoteric Section and later was one of the twelve regular members of the Inner Group. Following HPB's death, she became disillusioned with the new leadership of the Theosophical Society, and pulled away from the movement. She is best known for her writings and as the founder of the H. P. B. Library in 1917, and as co-founder with William Kingsland of the Blavatsky Association (1923-1947).

It is generally known that Alice Cleather was against Annie Besant, since she considered the latter had departed from H. P. Blavatsky's teachings.

It is less known is that she regarded William Quan Judge as having been under the hypnotic and psychic influence of Katherine Tingley. Her ideas on this subject have been compiled in an article published by the Blavatsky Archives:

On Mr. Judge's death in 1896, I was among those English members cabled for to attend the convention of New York when Mrs. Tingley was introduced to the E.S.T. Council as Mr. Judge's successor. She then asked me to accompany her on the tour round the world which passed through India in the winter of that year. Subsequently, in 1899, I and many others left Mrs. Tingley's Society on discovering that she was departing as far from H.P.B.'s original teachings as, on her side, Mrs. Besant was. To neither of these organisations was I, therefore, able to belong. Neither of their leaders inspired me with any confidence, as both were introducing ideas completely foreign to those promulgated by H.P.B. while professing to carrying on her work. [2]