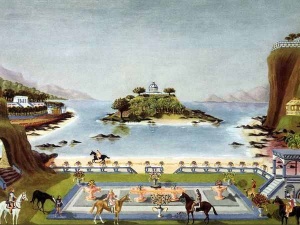 Atlantis was an ancient civilization that lasted four to five million years and existed about a million years before Egypt entered the official history books. It is commonly believed to be a myth but Theosophy tells us differently. The continent and islands which composed Atlantis were centered mainly in what we now know as the Atlantic Ocean. The common belief according to Plato was that the island continent disappeared beneath the ocean in one day. Actually the empire sank in portions in a series of earthquakes that began 800,000 years ago before the last island of Atlantis, Poseidonis, sank in 9564 BC.

Mainstream historians balk at the idea that Atlantis ever existed, categorizing it as a legend or a fairy tale. Academic historians seeking tenure or simply trying to keep the respect of colleagues would never publicly suggest that Atlantis could actually have been a real civilization. But Theosophy has given us details, and proof coming to light that Atlantis really did exist and thrived as a civilization in some ways more advance than our own for millions of years.

In 355 BC Plato wrote the book Timaeus, in which his character, Kritias, recounts the story of Atlantis, a story which has been in his family for generations. The tale of this great civilization had been originally told to his ancestor by an Egyptian priest named Solon.

According to Plato’s account the powerful empire of Atlantis was founded by Poseidon, the God of the Sea. It was located to the west of the "Pillars of Hercules" (the Straights of Gibraltar). On the island nation, Poseidon fathered five sets of twins. The firstborn was Atlas, for whom the empire and the surrounding ocean was named. Poseidon divided the land into ten sections, each to be ruled by a son, or his heirs.

The capital city of Atlantis was laid out as a series of concentric walls and canals. Atlantis was a marvel of engineering and advanced technology but according to Plato the people became corrupt and greedy. The gods decided to destroy them. There was a violent earthquake that supposedly sunk the huge island nation in one day. Many historians think Plato made up the story of Atlantis as an illustration of his teachings, but many other ancient historians and philosophers other than Plato have written about Atlantis.

Atlantis is often spoken of in the same breathe as Lemuria as if they existed simultaneously which they did not. Lemuria existed before Atlantis in the Pacific Ocean and was home to the Third Root-Race of humanity. Atlantis was the home of the Fourth Root-Race. The Fifth or Aryan Race exists today. There is to be a Sixth and a Seventh Race. According to Theosophy many thousands of years from now the Aryan Race will have had its run. At this time the land masses we know of, beginning with the British Isles, will sink beneath the sea and the land that was Atlantis will rise again from the ocean and after a time (having been under water of millions of years) will become habitable again and will be the home of the Sixth Race.

Due to Plato's account, Atlantis is often thought of as an island. However, according to H. P. Blavatsky it was "a whole continent of whose isles and islets many have to this day survived."[1] Plato's reference is to Poseidonis, the last island that survived by the end of Atlantis.

The Atlantean continent was gradually formed from parts of the old Lemuria, so we can see some overlapping between the two, especially in early Atlantis:

The Atlantic portion of Lemuria was the geological basis of what is generally known as Atlantis. The latter, indeed, must be regarded rather as a development of the Atlantic prolongation of Lemuria, than as an entirely new mass of land upheaved to meet the special requirements of the Fourth Root-Race. Just as in the case of Race-evolution, so in that of the shifting and re-shifting of continental masses, no hard and fast line can be drawn where a new order ends and another begins. Continuity in natural processes is never broken. . . . Their continent was formed by the coalescence of many islands and peninsulas which were upheaved in the ordinary course of time and became ultimately the true home of the great Race known as the Atlanteans. After this consummation was once attained . . . “Lemuria should no more be confounded with the Atlantis Continent, than Europe with America.”[2]

Atlantis united parts of Europe and Asia (Africa was mainly submerged)[3] with the Americas:

There was a time when the Indian peninsula was at one end of the line, and South America at the other, connected by a belt of islands and continents. The India of the prehistoric age was not only within the region at the sources of the Oxus and Iaxartes, but there was even in the days of history and within its memory, an upper, a lower, and a western India; and still earlier, it was doubly connected with the two Americas. The lands of the ancestors of those whom Ammianus Marcellinus calls the “Brahmans of Upper India” stretched from Kashmir far into the (now) deserts of Shamo. A pedestrian from the north might then have reached—hardly wetting his feet—the Alaskan Peninsula, through Manchooria, across the future gulf of Tartary, the Kurile and Aleutian Islands; while another traveller furnished with a canoe and starting from the south, could have walked over from Siam, crossed the Polynesian Islands and trudged into any part of the continent of South America.[4] 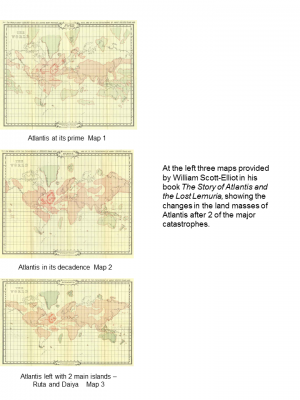 According to Mahatma K.H., the Atlantean continent was gradually sinking "while the new America was forming".[5] Blavatsky wrote that there was a first great catastrophe "several million years ago," which caused "the submersion of the main continent of Atlantis during the Miocene period." A second important cataclysm took place 850,000 years ago:

The destruction of the last Atlanteans, the remnants that perished 850,000 years ago, after which there was no great submersion until the day of Plato’s Atlantis, or Poseidonis, known to the Egyptians only because it happened in such relatively recent times. . . .
This event, the destruction of the famous island of Ruta and the smaller one Daitya, which occurred 850,000 years ago in the later Pliocene times, must not be confounded with the submersion of the main continent of Atlantis during the Miocene period.[6]

This catastrophe was the "first Great Flood within the Aryan historical memory."[7] All this left behind a few islands, the bigger of which was Poseidonis, mentioned by Plato in his writings:

The sinking of Atlantis (the group of continents and isles) begun during the Miocene period—as certain of your continents are now observed to be gradually sinking — and it culminated — first, in the final disappearance of the largest continent an event coincident with the elevation of the Alps; and second with that of the last of the fair Islands mentioned by Plato.[8]

In the Eocene Age—even in its "very first part," the great cycle of the fourth Race men, the Atlanteans—had already reached its highest point, and the great continent, the father of nearly all the present continents—showed the first symptoms of sinking—a process that occupied it down to 11,446 years ago, when its last island, that, translating its vernacular name, we may call with propriety Poseidonis—went down with a crash.[9]

The great event—the triumph of our "Sons of the Fire Mist" the inhabitants of "Shambullah" (when yet an island in the Central Asian Sea) over the selfish but not entirely wicked magicians of Poseidonis occurred just 11,446 ago.[10]

The Eocene age mentioned here was regarded by scientists of the nineteenth century to have started 15 million years ago. This final sinking of the last island happened as a result of a battle between the Adepts of the time and the black magicians who had taken control over humanity.

Atlantis had a life span of between four and five million years. It was an entire continent between Europe and North America with smaller islands and peninsulas mainly in the Atlantic Ocean that were also part of the empire. The actual land masses above water changed as earthquakes took the land down over a period of thousands of years, not in one day as Plato described. These were catastrophic earthquakes and landsides the likes of which the Fifth Race has never experienced. The first took place about 800,000 years before the final end, the second 200,000 years before, the third about 80,000 years before the last island of Atlantis, Poseidonis, sank about 11,580 years ago in 9,564 BC. According to Helena Petrovna Blavatsky these massive earthquakes were caused by a shift in the axis of the earth.

Evidence for the Reality of Atlantis

Suggesting the existence of an ancient land mass in the Atlantic Ocean which would have connected North America to Europe is indicated by the many very similar flora dating back to the Miocene age. Magnolias, tulip-trees, evergreen oaks to name a few found in Virginia and Florida correspond to a European counterpart. Skulls discovered on the banks of the Danube River bear a striking resemblance to the Carib people, an indigenous South American people living mainly in coastal regions of French Guiana, Suriname, Guyana, and Venezuela and also to the Old Peruvians. Frederic Farrar, classics scholar and comparative philologist, has found that the Basque people of Southern France/Northern Spain, have a language that bears no resemblance at all to the languages in the their geographic area but is very similar to the aboriginal people of North America. Stones found in the Canary Islands have sculpted symbols very similar to stones found around Lake Superior. Fossils found along the Eastern coast of South America are nearly identical to the those found on the coast of Western Europe extending down to Western South Africa, in fact, the geological structures of both coasts are identical. The horse supposedly originated in North America. How did it come to be present throughout Europe and Asia? A land mass connecting North America with Europe is the obvious answer.

Sea-soundings of the Atlantic Ocean indicate a huge elevation of land at the bottom of the ocean which reaches from the British Isles down the Western Coast of Africa. “The voyage of the Challenger has proved the existence of three long ridges in the Atlantic Ocean, one extending for more than three thousand miles, and lateral spurs may, by connecting these ridges, account for the marvelous similarity of the fauna of the Atlantic islands.”[11] Theses ridges rise some 9,000 feet from the ocean floor, peaking above the surface at the Azores, Ascension Island and other places. The curious thing about these land masses is that the mountain peaks and valleys of it could not have been made by underwater conditions, suggesting that at one time it had to be above ground in order to have this topography.

Many ancient writers before and after Plato have mentioned Atlantis, such as Zoroaster, Homer, Hesiod, Strabo, and Socrates. There are many flood-legends in just about every culture. William Scott-Elliot pointed to the similarity of language and of ethnological types and the correspondence of religious belief, ritual, and architecture between peoples separated by oceans. 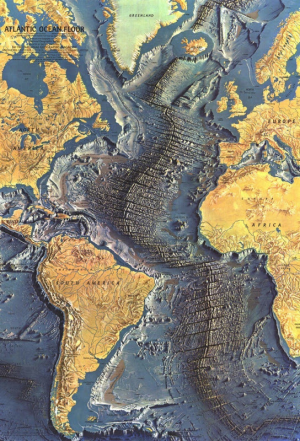 The Mid Atlantic Ridge rises 9,000 feet underwater directly where Atlantis would have been