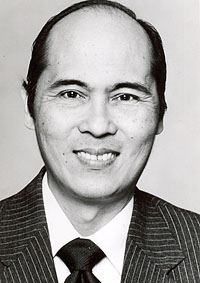 Bing Escudero was born in 1926 (1930 per Quest Books Web page) in Jolo, Sulu, the Philippines. He was a graduate in Philosophy and Psychology at the Far Eastern University in Manilla. 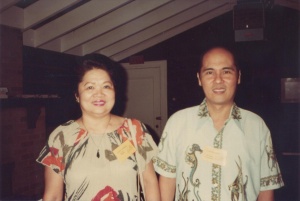 After settling in the United States of America, Bing held office as President of the Northwest Federation of the Theosophical Society in America. From June 1977 to 1988, he worked at the national center in Wheaton, Illinois, living on campus with his wife Rosie. As a national lecturer, he traveled all over the United States speaking to theosophical groups. Some of his lectures are available as recordings: "Cosmic Order and Karma" and "Cycle of Life and Rebirth," both available as recordings from Quest Books.[1]

Involvement with the Martinist Order

In 1991, Mr. Escudero came in contact with the Martinist Order of the Netherlands in 1991. He became one if its Initiators three years later, and influenced the growth of Martinism in the central United States.[2]

During his last years, he founded and presided over the Unisophia Research Institute at the Narada Theosophical Society in 2000. It was dedicated to the publication and preservation of his writings. He died on April 29, 2005.

The Theosophical Society in Seattle posted this on their Website:

It is with Deep Regret that we announce to the Theosophical world the death of our Theosophical Scholar and Mentor, Bing Escudero passed into the Light on April 29, 2005 at around 4:30 pm at the home of his son Riel in Kent, Washington, USA.

He leaves a great chasm. He also leaves us a legacy, The Unisophia Research Study Institute which we hope to help grow and prosper celebrating Bing's dedicated life as its Legacy. We hope to disseminate among all T. S. his works, (writings, etc. that he has accomplished in this incarnation.)

Bing Escudero had been an active member of the Theosophical Society since 1949. He was a graduate in Philosophy and Psychology, Far Eastern University, Manila, was formerly the National President of the Theosophical Society in the Philippines. He had a varied background in philosophy, industrial engineering and management consulting, university teaching and administration. Bing was born in Jolo, Sulu, Philippines.

He had conducted courses of study on The Secret Doctrine, The Ancient Mysteries and other theosophical themes in many of the major cities of the United States. He previously held office as President of the Northwest Federation of the Theosophical Society in America and in June, 1977 began to work full time for the American Section and became its leading lecturer.

He made Speaking Tours throughout the American Section, visiting over a hundred places, and had been enthusiastically accepted by the membership. He had the heart of a little child and his tenderness was only equaled by his strength His energy, his vision, his simplicity in explaining deep occult teachings, his absolute loyalty to the Theosophical Society.

During his later years he worked with The Narada Theosophical Society, bringing his teachings, writings, and lectures to many students of Theosophy. Our love and thoughts are with Rosie and Bing's family at this time of his leaving. Remember- he is in the Light. Recall him only as Being in the Light! Bing was our Scholar and our mentor and helped our Lodge back into active Being. We will honor him by bringing his vehicle - Unisophia Research Study Institute to life and being!